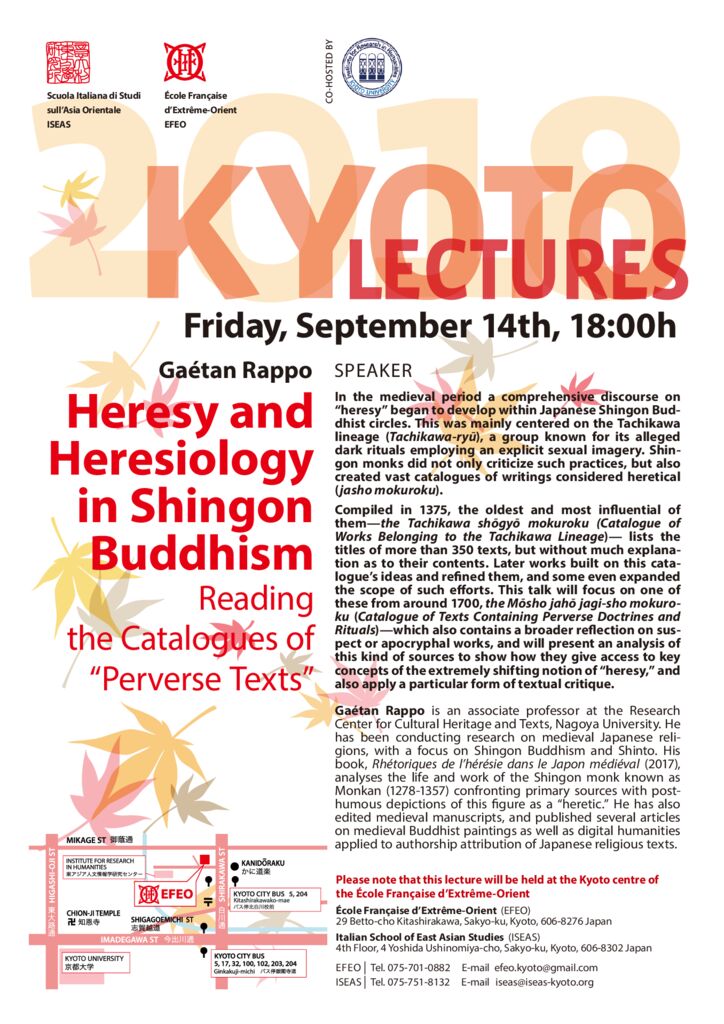 Heresy and Heresiology in Shingon Buddhism

Reading the Catalogues of “Perverse Texts”

In the medieval period a comprehensive discourse on “heresy” began to develop within Japanese Shingon Buddhist circles. This was mainly centered on the Tachikawa lineage (Tachikawa-ryu), a group known for its alleged dark rituals employing an explicit sexual imagery. Shingon monks did not only criticize such practices, but also created vast catalogues of writings considered heretical (jasho mokuroku).

Compiled in 1375, the oldest and most inuential of them—the Tachikawa shogyo mokuroku (Catalogue of Works Belonging to the Tachikawa Lineage)— lists the titles of more than 350 texts, but without much explanation as to their contents. Later works built on this catalogue’s ideas and rened them, and some even expanded the scope of such eorts. This talk will focus on one of these from around 1700, the Mosho jaho jagi-sho mokuroku (Catalogue of Texts Containing Perverse Doctrines and Rituals)—which also contains a broader reection on suspect or apocryphal works, and will present an analysis of this kind of sources to show how they give access to key concepts of the extremely shifting notion of “heresy,” and also apply a particular form of textual critique.

Gaétan Rappo is an associate professor at the Research Center for Cultural Heritage and Texts, Nagoya University. He has been conducting research on medieval Japanese religions, with a focus on Shingon Buddhism and Shinto. His book, Rhétoriques de l’hérésie dans le Japon médiéval (2017), analyses the life and work of the Shingon monk known as Monkan (1278-1357) confronting primary sources with posthumous depictions of this gure as a “heretic.” He has also edited medieval manuscripts, and published several articles on medieval Buddhist paintings as well as digital humanities applied to authorship attribution of Japanese religious texts.