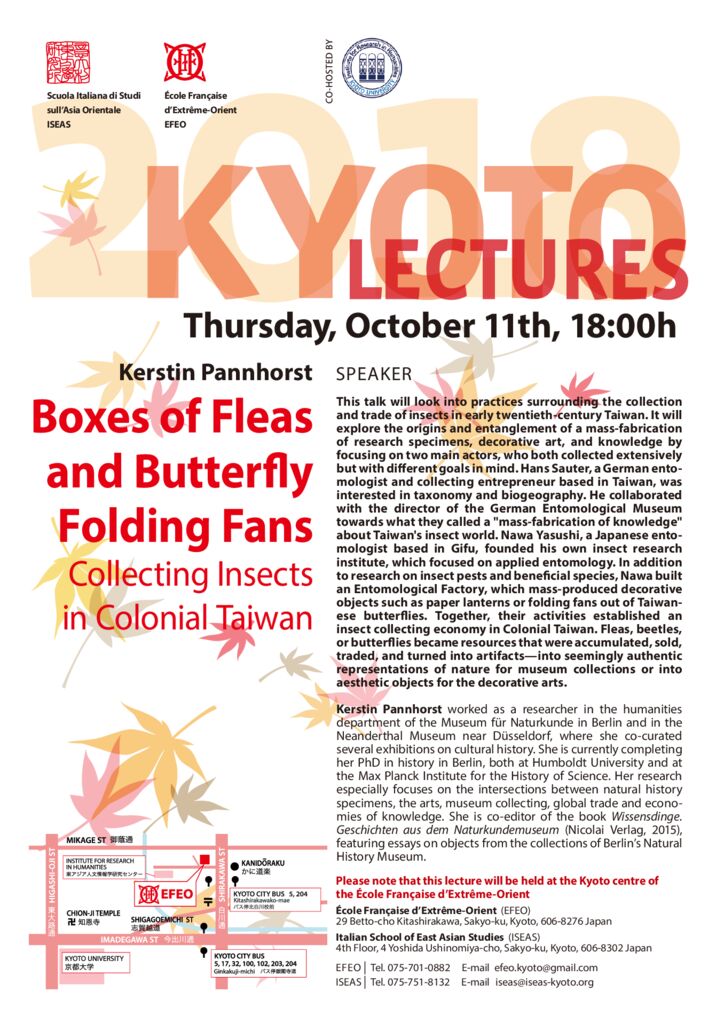 Boxes of Fleas and Butter

This talk will look into practices surrounding the collection and trade of insects in early twentieth-century Taiwan. It will explore the origins and entanglement of a mass-fabrication of research specimens, decorative art, and knowledge by focusing on two main actors, who both collected extensively but with different goals in mind. Hans Sauter, a German entomologist and collecting entrepreneur based in Taiwan, was interested in taxonomy and biogeography. He collaborated with the director of the German Entomological Museum towards what they called a “mass-fabrication of knowledge” about Taiwan’s insect world. Nawa Yasushi, a Japanese entomologist based in Gifu, founded his own insect research institute, which focused on applied entomology. In addition to research on insect pests and beneficial species, Nawa built an Entomological Factory, which mass-produced decorative objects such as paper lanterns or folding fans out of Taiwanese butteries. Together, their activities established an insect collecting economy in Colonial Taiwan. Fleas, beetles, or butterflies became resources that were accumulated, sold, traded, and turned into artifacts—into seemingly authentic representations of nature for museum collections or into aesthetic objects for the decorative arts.

Kerstin Pannhorst worked as a researcher in the humanities department of the Museum für aturkunde in Berlin and in the Neanderthal Museum near Düsseldorf, where she co-curated several exhibitions on cultural history. She is currently completing her PhD in history in Berlin, both at Humboldt niversity and at the Max Planck Institute for the History of Science. Her research especially focuses on the intersections between natural history specimens, the arts, museum collecting, global trade and  conomies of knowledge. She is co-editor of the book Wissensdinge. Geschichten aus dem aturkundemuseum (Nicolai Verlag, 2015), featuring essays on objects from the collections of Berlin’s Natural History Museum.