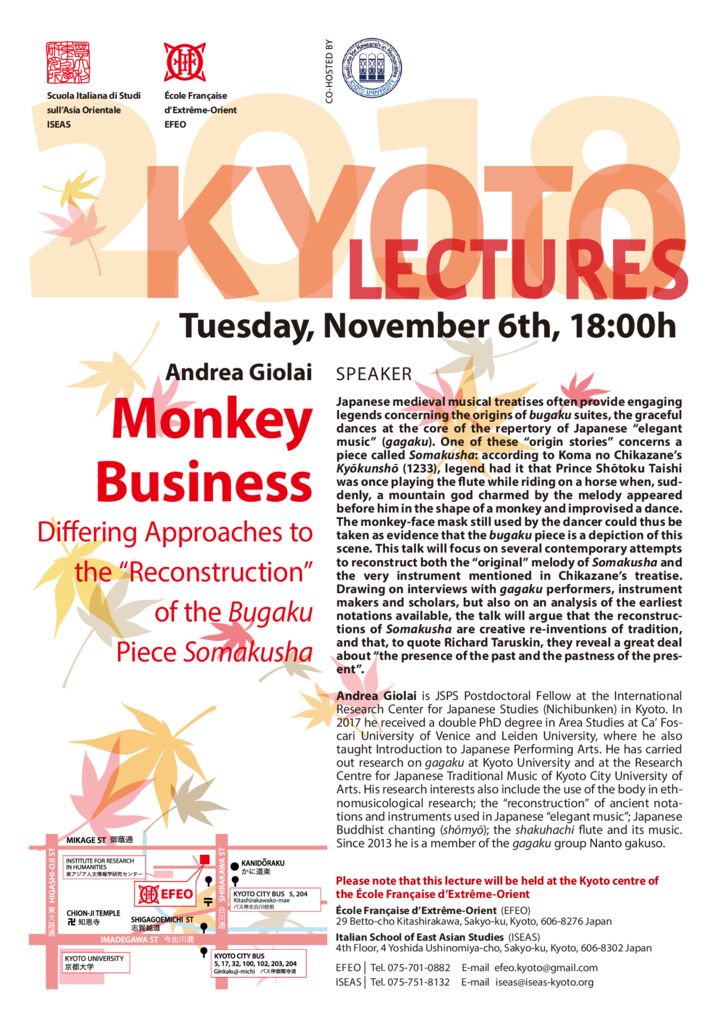 Differing Approaches to the “Reconstruction” of the Bugaku Piece Somakusha

Japanese medieval musical treatises often provide engaging legends concerning the origins of bugaku suites, the graceful dances at the core of the repertory of Japanese “elegant music” (gagaku). One of these “origin stories” concerns a piece called Somakusha: according to Koma no Chikazane’s Kyōkunshō (1233), legend had it that Prince Shōtoku Taishi was once playing the flute while riding on a horse when, suddenly, a mountain god charmed by the melody appeared before him in the shape of a monkey and improvised a dance. The monkey-face mask still used by the dancer could thus be taken as evidence that the bugaku piece is a depiction of this scene. This talk will focus on several contemporary attempts to reconstruct both the “original” melody of Somakusha and the very instrument mentioned in Chikazane’s treatise. Drawing on interviews with gagaku performers, instrument makers and scholars, but also on my own analysis of the earliest notations available, the talk will argue that the reconstructions of Somakusha are creative re-inventions of tradition, and that, to quote Richard Taruskin, they reveal a great deal about “the presence of the past and the pastness of the present”.

Andrea Giolai is JSPS Postdoctoral Fellow at the International Research Center for Japanese Studies (Nichibunken) in Kyoto. In 2017 he received a double PhD degree in Area Studies at Ca’ Foscari University of Venice and Leiden University, where he also taught Introduction to Japanese Performing Arts. He has carried out research on gagaku at Kyoto University and at the Research Centre for Japanese Traditional Music of Kyoto City University of Arts. His research interests also include the use of the body in ethnomusicological research; the “reconstruction” of ancient notations and instruments used in Japanese “elegant music”; Japanese Buddhist chanting (shōmyō); the shakuhachi flute and its music. Since 2013 he is a member of the gagaku group Nanto gakuso.