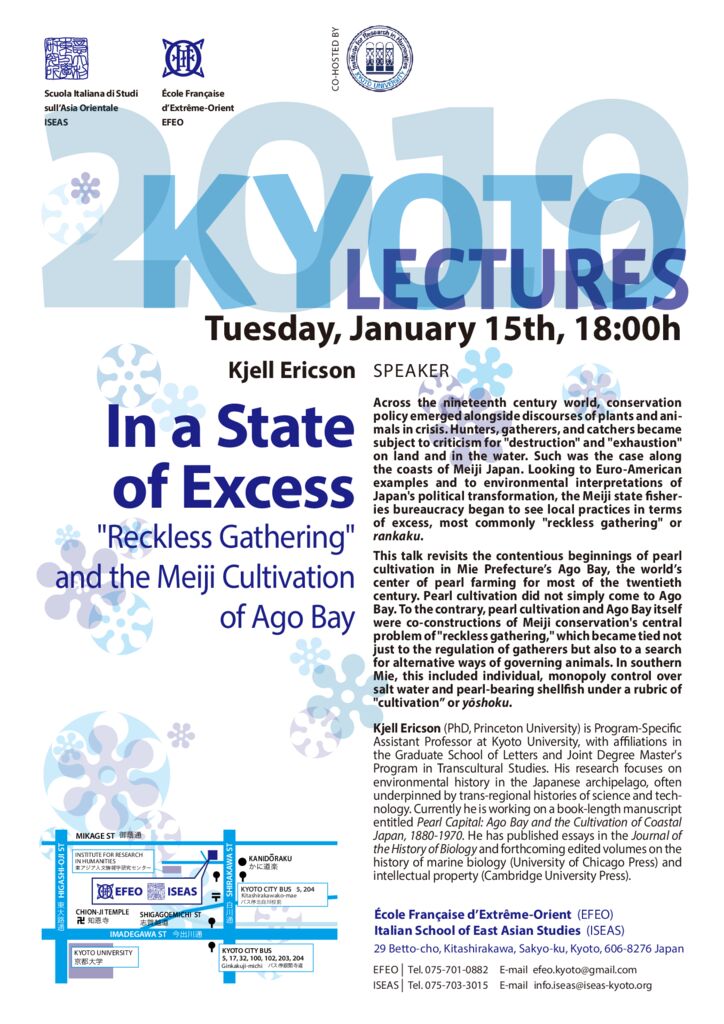 In a State of Excess

"Reckless Gathering" and the Meiji Cultivation of Ago Bay

Across the nineteenth century world, conservation policy emerged alongside discourses of plants and animals in crisis. Hunters, gatherers, and catchers became subject to criticism for “destruction” and “exhaustion” on land and in the water. Such was the case along the coasts of Meiji Japan. Looking to Euro-American examples and to environmental interpretations of Japan’s political transformation, the Meiji state fisheries bureaucracy began to see local practices in terms of excess, most commonly “reckless gathering” or rankaku.

This talk revisits the contentious beginnings of pearl cultivation in Mie Prefecture’s Ago Bay, the world’s center of pearl farming for most of the twentieth century. Pearl cultivation did not simply come to Ago Bay. To the contrary, pearl cultivation and Ago Bay itself were co-constructions of Meiji conservation’s central problem of “reckless gathering,” which became tied not just to the regulation of gatherers but also to a search for alternative ways of governing animals. In southern Mie, this included individual, monopoly control over salt water and pearl-bearing shellfish under a rubric of “cultivation” or yōshoku.

Kjell Ericson (PhD, Princeton University) is Program-Specific Assistant Professor at Kyoto University, with affiliations in the Graduate School of Letters and Joint Degree Master’s Program in Transcultural Studies. His research focuses on environmental history in the Japanese archipelago, often underpinned by trans-regional histories of science and technology. Currently he is working on a book-length manuscript entitled Pearl Capital: Ago Bay and the Cultivation of Coastal Japan, 1880-1970. He has published essays in the Journal of the History of Biology and forthcoming edited volumes on the history of marine biology (University of Chicago Press) and intellectual property (Cambridge University Press).