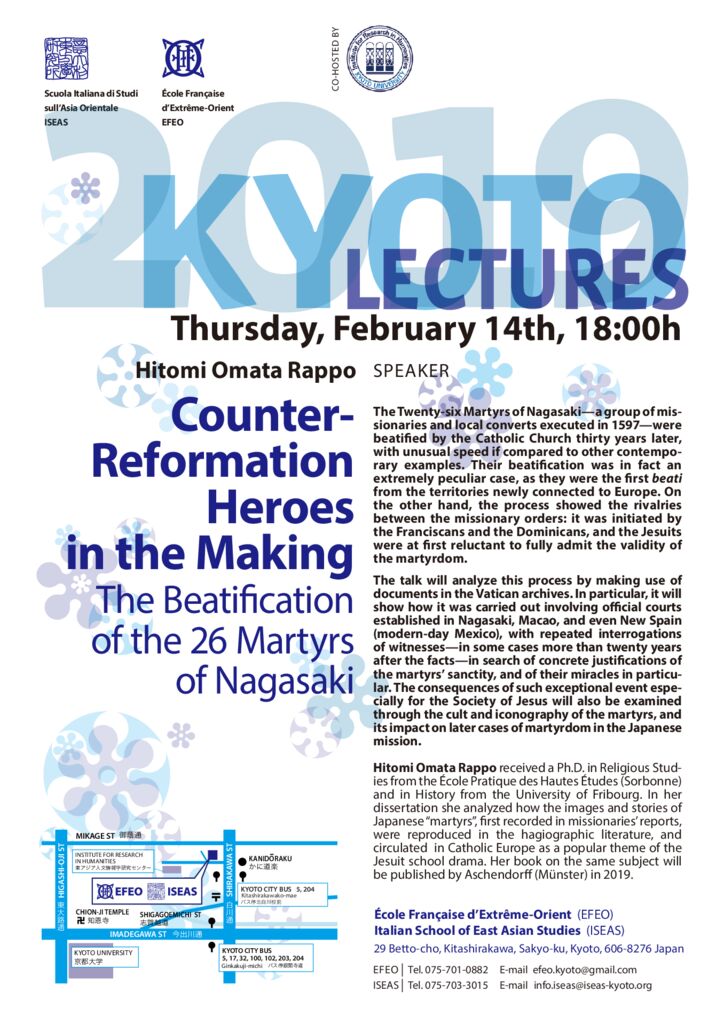 Counter-Reformation Heroes in the Making

The Beatification of the 26 Martyrs of Nagasaki

The Twenty-six Martyrs of Nagasaki—a group of missionaries and local converts executed in 1597—were beatified by the Catholic Church thirty years later, with unusual speed if compared to other contemporary examples. Their beatification was in fact an extremely peculiar case, as they were the first beati from the territories newly connected to Europe. On the other hand, the process showed the rivalries between the missionary orders: it was initiated by the Franciscans and the Dominicans, and the Jesuits were at first reluctant to fully admit the validity of the martyrdom.

The talk will analyze this process by making use of documents in the Vatican archives. In particular, it will show how it was carried out involving official courts established in Nagasaki, Macao, and even New Spain (modern-day Mexico), with repeated interrogations of witnesses—in some cases more than twenty years after the facts—in search of concrete justifications of the martyrs’ sanctity, and of their miracles in particular. The consequences of such exceptional event especially for the Society of Jesus will also be examined through the cult and iconography of the martyrs, and its impact on later cases of martyrdom in the Japanese mission.

Hitomi Omata Rappo received a Ph.D. in Religious Studies from the École Pratique des Hautes Études (Sorbonne) and in History from the University of Fribourg. In her dissertation she analyzed how the images and stories of Japanese “martyrs”, first recorded in missionaries’ reports, were reproduced in the hagiographic literature, and circulated in Catholic Europe as a popular theme of the Jesuit school drama. Her book on the same subject will be published by Aschendorff (Münster) in 2019.