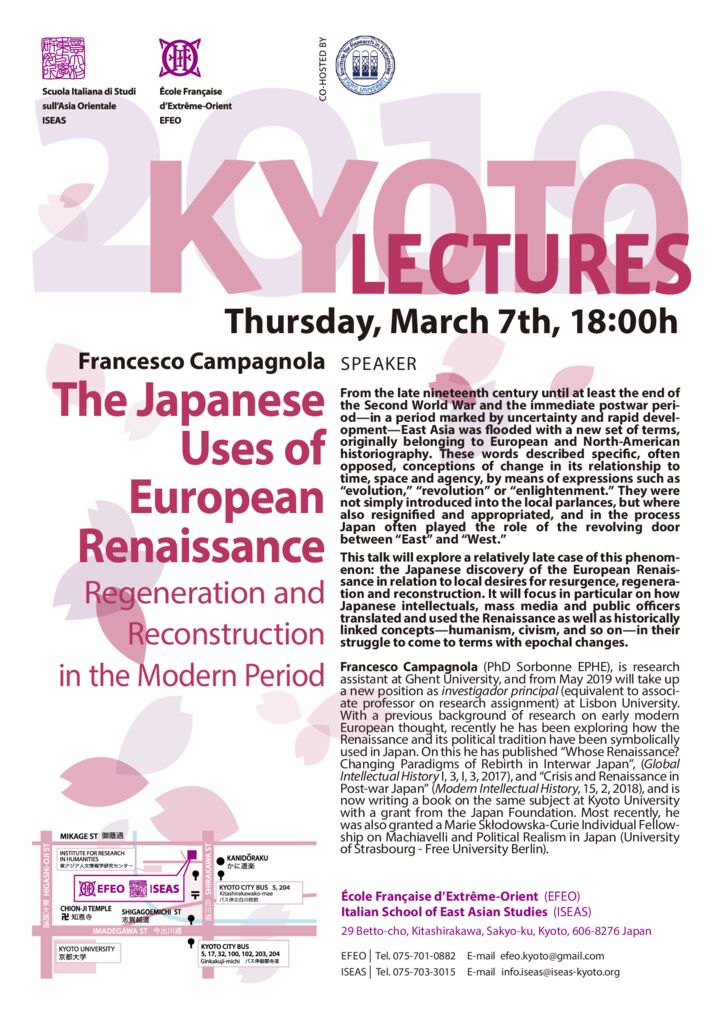 The Japanese Uses of European Renaissance

Regeneration and Reconstruction in the Modern Period

From the late nineteenth century until at least the end of the Second World War and the immediate postwar period—in a period marked by uncertainty and rapid development—East Asia was flooded with a new set of terms, originally belonging to European and North-American historiography. These words described specific, often opposed, conceptions of change in its relationship to time, space and agency, by means of expressions such as “evolution,” “revolution” or “enlightenment.” They were not simply introduced into the local parlances, but were also resignified and appropriated, and in the process Japan often played the role of the revolving door between “East” and “West.”

This talk will explore a relatively late case of this phenomenon: the Japanese discovery of the European Renaissance in relation to local desires for resurgence, regeneration and reconstruction. It will focus in particular on how Japanese intellectuals, mass media and public officers translated and used the Renaissance as well as historically linked concepts—humanism, civism, and so on—in their struggle to come to terms with epochal changes.

Francesco Campagnola (PhD Sorbonne EPHE), is research assistant at Ghent University, and from May 2019 will take up a new position as investigador principal (equivalent to associate professor on research assignment) at Lisbon University. With a previous background of research on early modern Europeanthought, recently he has been exploring how the Renaissance and its political tradition have been symbolically used in Japan. On this he has published “Whose Renaissance? Changing Paradigms of Rebirth in Interwar Japan” (Global Intellectual History, 1, 3, 2017) and “Crisis and Renaissance in Post-war Japan” (Modern Intellectual History, 15, 2, 2018), and is now writing a book on the same subject at Kyoto University with a grant from the Japan Foundation. Mostrecently, he was also granted a Marie Skłodowska-Curie Individual Fellowship on Machiavelli and Political Realism in Japan (University of Strasbourg – Free University Berlin).