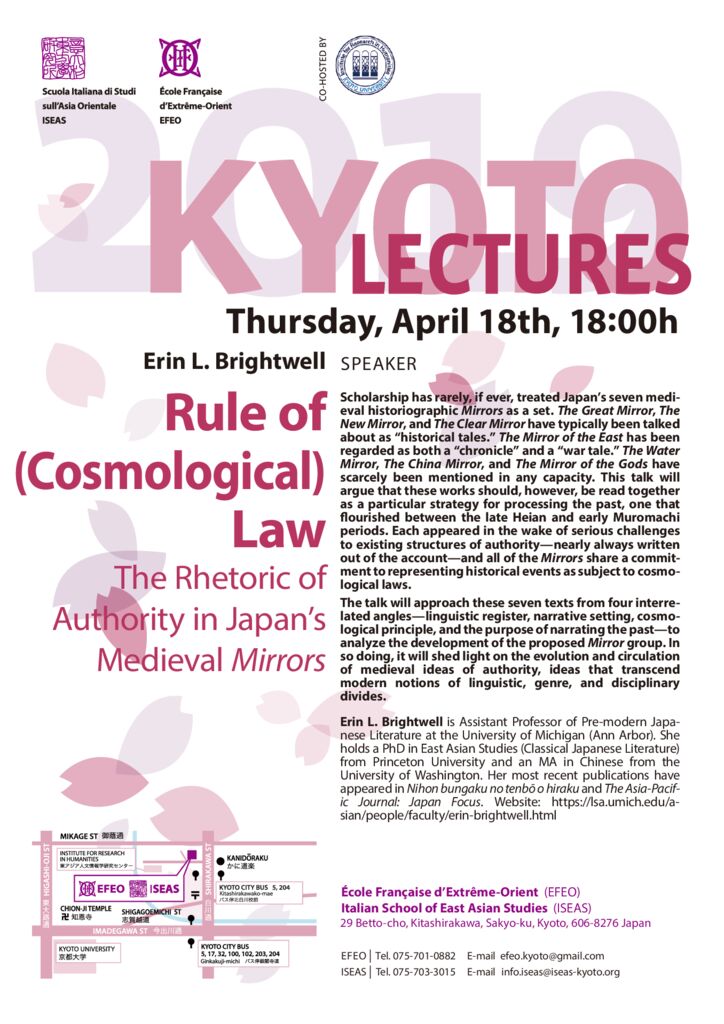 The Rhetoric of Authority in Japan’s Medieval Mirrors

Scholarship has rarely, if ever, treated Japan’s seven medieval historiographic Mirrors as a set. The Great Mirror, The New Mirror, and The Clear Mirror have typically been talked about as “historical tales.” The Mirror of the East has been regarded as both a “chronicle” and a “war tale.” The Water Mirror, The China Mirror, and The Mirror of the Gods have scarcely been mentioned in any capacity. This talk will argue that these works should, however, be read together as a particular strategy for processing the past, one that ourished between the late Heian and early Muromachi periods. Each appeared in the wake of serious challenges to existing structures of authority—nearly always written out of the account—and all of the Mirrors share a commitment to representing historical events as subject to cosmological laws.

The talk will approach these seven texts from four interrelated angles—linguistic register, narrative setting, cosmological principle, and the purpose of narrating the past—to analyze the development of the proposed Mirror group. In so doing, it will shed light on the evolution and circulation of medieval ideas of authority, ideas that transcend modern notions of linguistic, genre, and disciplinary divides.

Erin L. Brightwell is Assistant Professor of Pre-modern Japanese Literature at the University of Michigan (Ann Arbor). She holds a PhD in East Asian Studies (Classical Japanese Literature) from Princeton University and an MA in Chinese from the University of Washington. Her most recent publications have appeared in Nihon bungaku no tenbo o hiraku and The Asia-Pacific Journal: Japan Focus. Website: https://lsa.umich.edu/asian/people/faculty/erin-brightwell.html