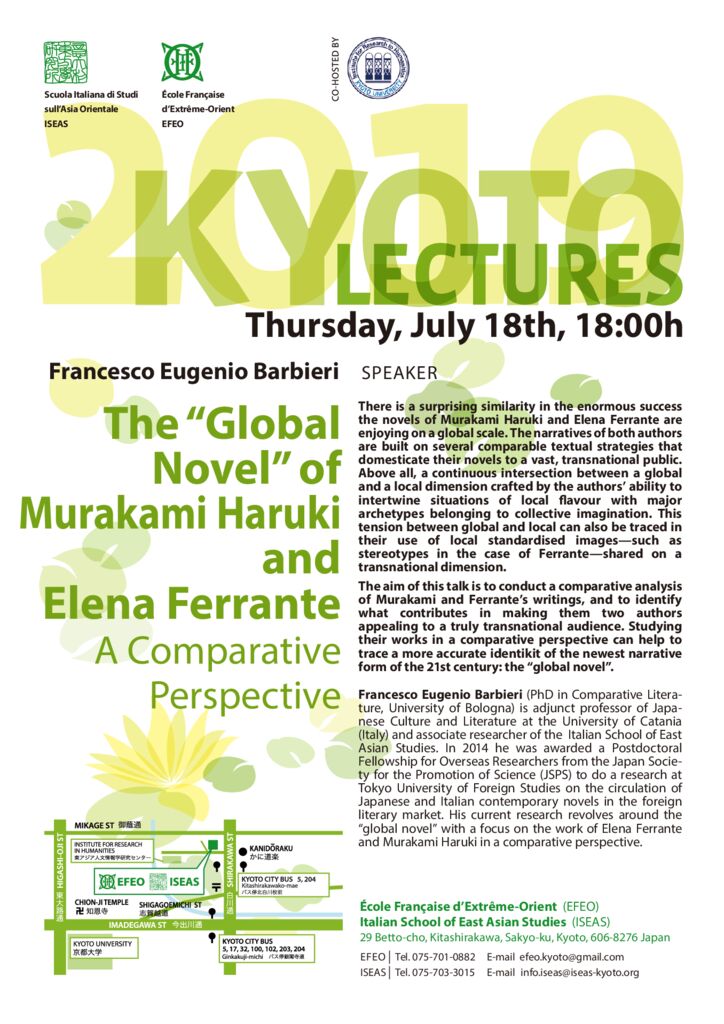 The “Global Novel” of Murakami Haruki and Elena Ferrante

There is a surprising similarity in the enormous success the novels of Murakami Haruki and Elena Ferrante are enjoying on a global scale. The narratives of both authors are built on several comparable textual strategies that domesticate their novels to a vast, transnational public. Above all, a continuous intersection between a global and a local dimension crafted by the authors’ ability to intertwine situations of local avour with major archetypes belonging to collective imagination. This tension between global and local can also be traced in their use of local standardised images—such as stereotypes in the case of Ferrante—shared on a transnational dimension.

The aim of this talk is to conduct a comparative analysis of Murakami and Ferrante’s writings, and to identify what contributes in making them two authors appealing to a truly transnational audience. Studying their works in a comparative perspective can help to trace a more accurate identikit of the newest narrative form of the 21st century: the “global novel”.

Francesco Eugenio Barbieri (PhD in Comparative Literature, University of Bologna) is adjunct professor of Japanese Culture and Literature at the University of Catania (Italy) and associate researcher of the Italian School of East Asian Studies. In 2014 he was awarded a Postdoctoral Fellowship for Overseas Researchers from the Japan Society for the Promotion of Science (JSPS) to do a research at Tokyo University of Foreign Studies on the circulation of Japanese and Italian contemporary novels in the foreign literary market. His current research revolves around the “global novel” with a focus on the work of Elena Ferrante and Murakami Haruki in a comparative perspective.