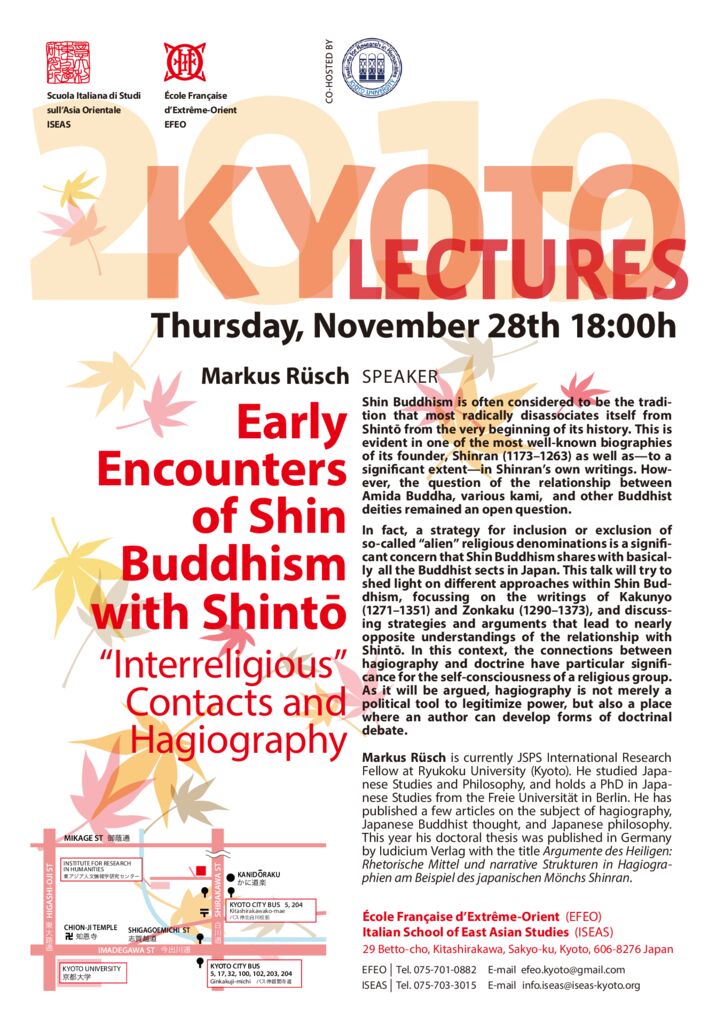 Shin Buddhism is often considered to be the tradition that most radically disassociates itself from Shintō from the very beginning of its history. This is evident in one of the most well-known biographies of its founder, Shinran (1173–1263) as well as—to a significant extent—in Shinran’s own writings. However, the question of the relationship between Amida Buddha, various kami,  and other Buddhist deities remained an open question.

In fact, a strategy for inclusion or exclusion of so-called “alien” religious denominations is a significant concern that Shin Buddhism shares with basically  all the Buddhist sects in Japan. This talk will try to shed light on different approaches within Shin Buddhism, focussing on the writings of Kakunyo (1271–1351) and Zonkaku (1290–1373), and discussing strategies and arguments that lead to nearly opposite understandings of the relationship with Shintō. In this context, the connections between hagiography and doctrine have particular significance for the self-consciousness of a religious group. As it will be argued, hagiography is not merely a political tool to legitimize power, but also a place where an author can develop forms of doctrinal debate.

Markus Rüsch is currently JSPS International Research Fellow at Ryukoku University (Kyoto). He studied Japanese Studies and Philosophy, and holds a PhD in Japanese Studies from the Freie Universität in Berlin. He has published a few articles on the subject of hagiography, Japanese Buddhist thought, and Japanese philosophy. This year his doctoral thesis was published in Germany by Iudicium Verlag with the title Argumente des Heiligen: Rhetorische Mittel und narrative Strukturen in Hagiographien am Beispiel des japanischen Mönchs Shinran.