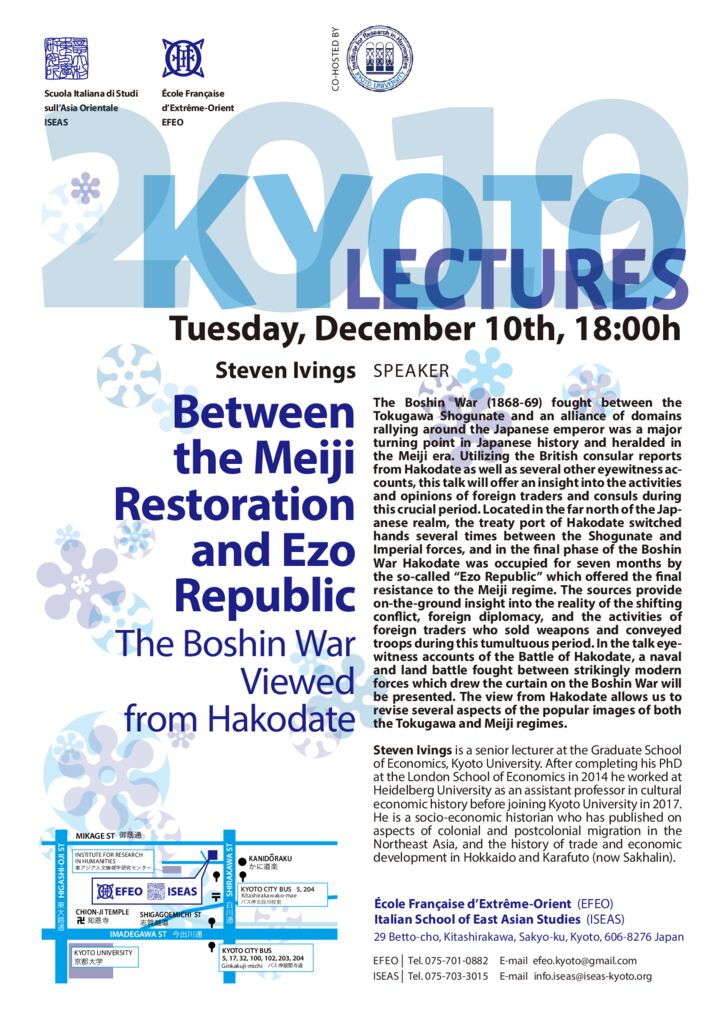 Between the Meiji Restoration and Ezo Republic

The Boshin War Viewed from Hakodate

The Boshin War (1868-69) fought between the Tokugawa Shogunate and an alliance of domains rallying around the Japanese emperor was a major turning point in Japanese history and heralded in the Meiji era. Utilizing the British consular reports from Hakodate as well as several other eyewitness accounts, this talk will offer an insight into the activities and opinions of foreign traders and consuls during this crucial period. Located in the far north of the Japanese realm, the treaty port of Hakodate switched hands several times between the Shogunate and Imperial forces, and in the final phase of the Boshin War Hakodate was occupied for seven months by the so-called “Ezo Republic” which offered the final resistance to the Meiji regime. The sources provide on-the-ground insight into the reality of the shifting conflict, foreign diplomacy, and the activities of foreign traders who sold weapons and conveyed troops during this tumultuous period. In the talk eyewitness accounts of the Battle of Hakodate, a naval and land battle fought between strikingly modern forces which drew the curtain on the Boshin War will be presented. The view from Hakodate allows us to revise several aspects of the popular images of both the Tokugawa and Meiji regimes.

Steven Ivings is a senior lecturer at the Graduate School of Economics, Kyoto University. After completing his PhD at the London School of Economics in 2014 he worked at Heidelberg University as an assistant professor in cultural economic history before joining Kyoto University in 2017. He is a socio-economic historian who has published on aspects of colonial and postcolonial migration in the Northeast Asia, and the history of trade and economic development in Hokkaido and Karafuto (now Sakhalin).