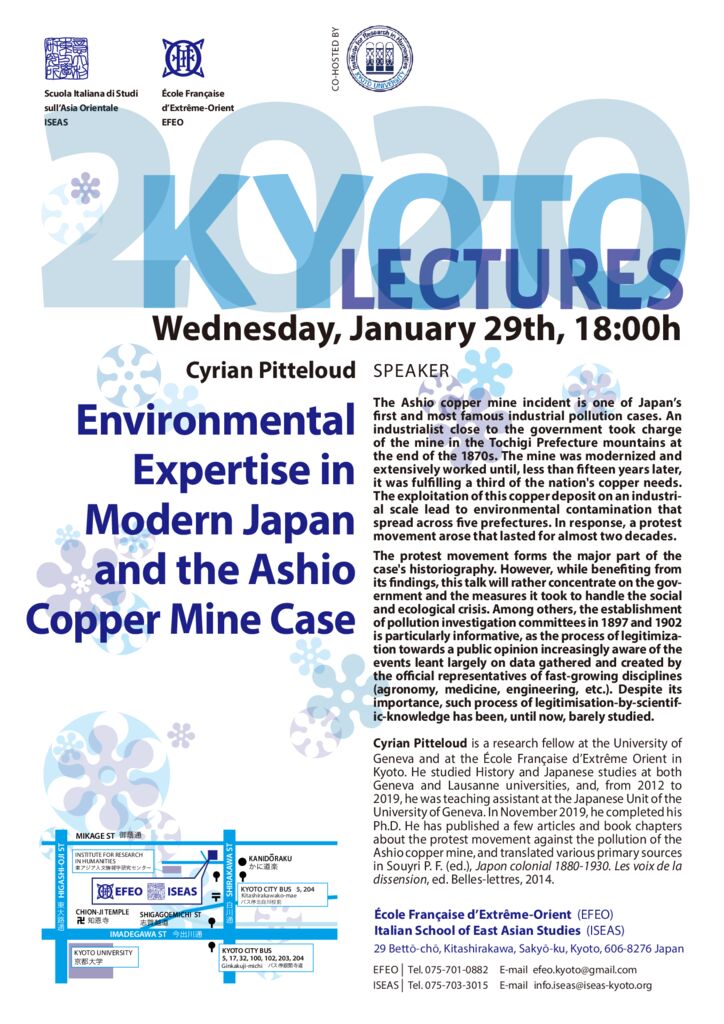 Environmental Expertise in Modern Japan and the Ashio Copper Mine Case

The Ashio copper mine incident is one of Japan’s first and most famous industrial pollution cases. An industrialist close to the government took charge of the mine in the Tochigi Prefecture mountains at the end of the 1870s. The mine was modernized and extensively worked until, less than fifteen years later, it was fulfilling a third of the nation’s copper needs. The exploitation of this copper deposit on an industrial scale lead to environmental contamination that spread across five prefectures. In response, a protest movement arose that lasted for almost two decades.

The protest movement forms the major part of the case’s historiography. However, while benefiting from its findings, this talk will rather concentrate on the government and the measures it took to handle the social and ecological crisis. Among others, the establishment of pollution investigation committees in 1897 and 1902 is particularly informative, as the process of legitimization towards a public opinion increasingly aware of the events leant largely on data gathered and created by the ocial representatives of fast-growing disciplines (agronomy, medicine, engineering, etc.). Despite its importance, such process of legitimisation-by-scientific- knowledge has been, until now, barely studied.

Cyrian Pitteloud is a research fellow at the University of Geneva and at the École Française d’Extrême Orient in Kyoto. He studied History and Japanese studies at both Geneva and Lausanne universities, and, from 2012 to 2019, he was teaching assistant at the Japanese Unit of the University of Geneva. In November 2019, he completed his Ph.D. He has published a few articles and book chapters about the protest movement against the pollution of the Ashio copper mine, and translated various primary sources in Souyri P. F. (ed.), Japon colonial 1880-1930. Les voix de la dissension, ed. Belles-lettres, 2014.