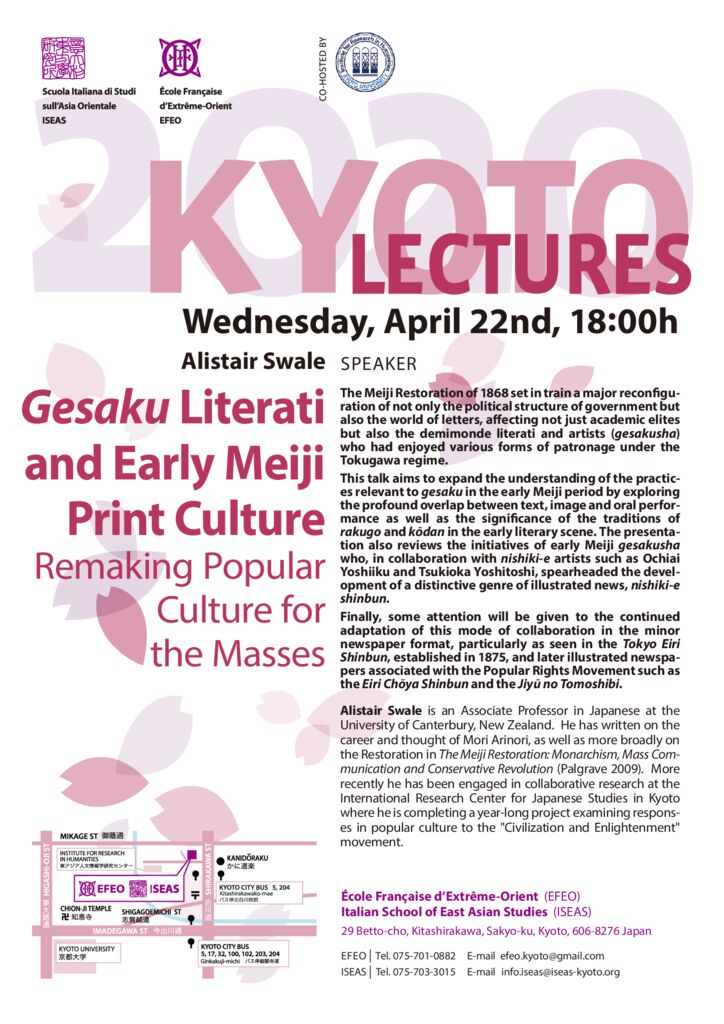 Remaking Popular Culture for the Masses

The Meiji Restoration of 1868 set in train a major reconfiguration of not only the political structure of government but also the world of letters, aecting not just academic elites but also the demimonde literati and artists (gesakusha) who had enjoyed various forms of patronage under the Tokugawa regime.

This talk aims to expand the understanding of the practices relevant to gesaku in the early Meiji period by exploring the profound overlap between text, image and oral performance as well as the significance of the traditions of rakugo and kôdan in the early literary scene. The presentation also reviews the initiatives of early Meiji gesakusha who, in collaboration with nishiki-e artists such as Ochiai Yoshiiku and Tsukioka Yoshitoshi, spearheaded the development of a distinctive genre of illustrated news, nishiki-e shinbun.

Finally, some attention will be given to the continued adaptation of this mode of collaboration in the minor newspaper format, particularly as seen in the Tokyo Eiri Shinbun, established in 1875, and later illustrated newspapers associated with the Popular Rights Movement such as the Eiri Chôya Shinbun and the Jiyû no Tomoshibi.

Alistair Swale is an Associate Professor in Japanese at the University of Canterbury, New Zealand. He has written on the career and thought of Mori Arinori, as well as more broadly on the Restoration in The Meiji Restoration: Monarchism, Mass Communication and Conservative Revolution (Palgrave 2009). More recently he has been engaged in collaborative research at the International Research Center for Japanese Studies in Kyoto where he is completing a year-long project examining responses in popular culture to the “Civilization and Enlightenment” movement.