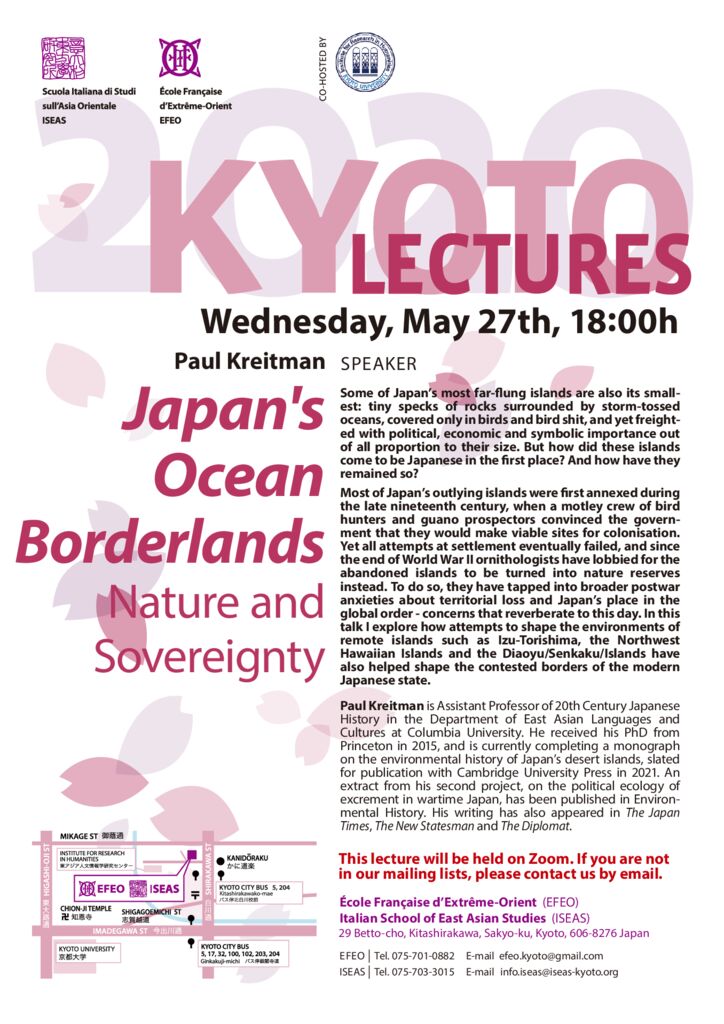 Some of Japan’s most far-flung islands are also its smallest: tiny specks of rocks surrounded by storm-tossed oceans, covered only in birds and bird shit, and yet freighted with political, economic and symbolic importance out of all proportion to their size. But how did these islands come to be Japanese in the first place? And how have they remained so?

Most of Japan’s outlying islands were first annexed during the late nineteenth century, when a motley crew of bird hunters and guano prospectors convinced the government that they would make viable sites for colonisation. Yet all attempts at settlement eventually failed, and since the end of World War II ornithologists have lobbied for the abandoned islands to be turned into nature reserves instead. To do so, they have tapped into broader postwar anxieties about territorial loss and Japan’s place in the global order – concerns that reverberate to this day. In this talk I explore how attempts to shape the environments of remote islands such as Izu-Torishima, the Northwest Hawaiian Islands and the Diaoyu/Senkaku/Islands have also helped shape the contested borders of the modern Japanese state.

Paul Kreitman is Assistant Professor of 20th Century Japanese History in the Department of East Asian Languages and Cultures at Columbia University. He received his PhD from Princeton in 2015, and is currently completing a monograph on the environmental history of Japan’s desert islands, slated for publication with Cambridge University Press in 2021. An extract from his second project, on the political ecology of excrement in wartime Japan, has been published in Environmental History. His writing has also appeared in The Japan Times, The New Statesman and The Diplomat.