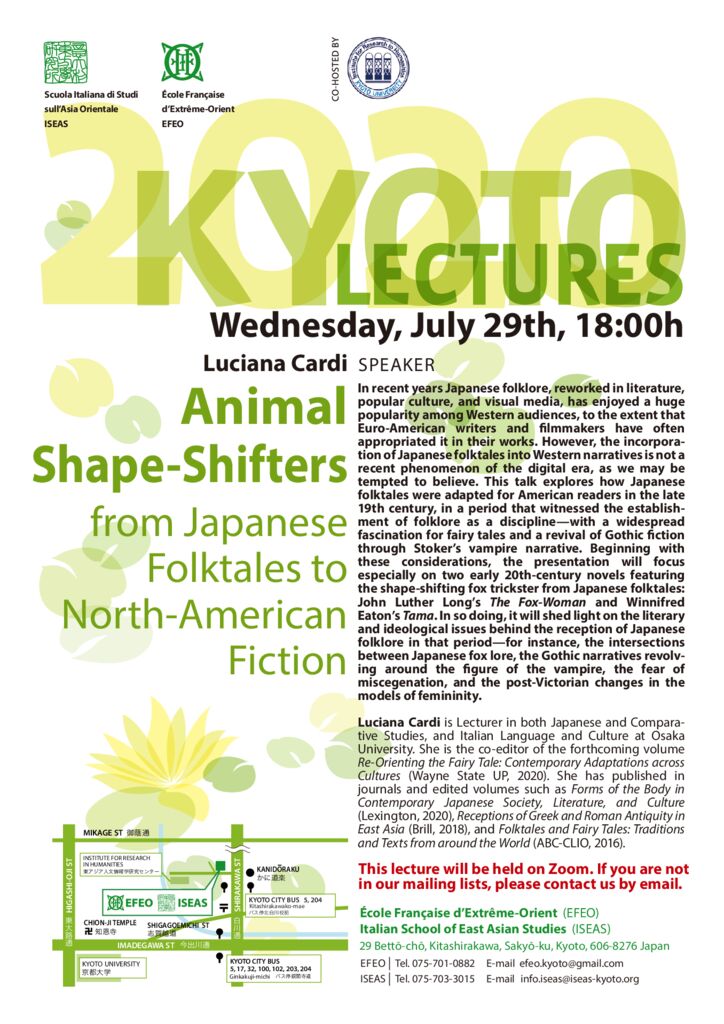 from Japanese Folktales to North-American Fiction

In recent years Japanese folklore, reworked in literature, popular culture, and visual media, has enjoyed a huge popularity among Western audiences, to the extent that Euro-American writers and filmmakers have often appropriated it in their works. However, the incorporation of Japanese folktales into Western narratives is not a recent phenomenon of the digital era, as we may be tempted to believe. This talk explores how Japanese folktales were adapted for American readers in the late 19th century, in a period that witnessed the establishment of folklore as a discipline—with a widespread fascination for fairy tales and a revival of Gothic fiction through Stoker’s vampire narrative. Beginning with these considerations, the presentation will focus especially on two early 20th-century novels featuring the shape-shifting fox trickster from Japanese folktales: John Luther Long’s The Fox-Woman and Winnifred Eaton’s Tama. In so doing, it will shed light on the literary and ideological issues behind the reception of Japanese folklore in that period-for instance, the intersections between Japanese fox lore, the Gothic narratives revolving around the figure of the vampire, the fear of miscegenation, and the post-Victorian changes in the models of femininity.

Luciana Cardi is Lecturer in both Japanese and Comparative Studies, and Italian Language and Culture at Osaka University. She is the co-editor of the forthcoming volume Re-Orienting the Fairy Tale: Contemporary Adaptations across Cultures (Wayne State UP, 2020). She has published in journals and edited volumes such as Forms of the Body in Contemporary Japanese Society, Literature, and Culture (Lexington, 2020), Receptions of Greek and Roman Antiquity in East Asia (Brill, 2018), and Folktales and Fairy Tales: Traditions and Texts from around the World (ABC-CLIO, 2016).