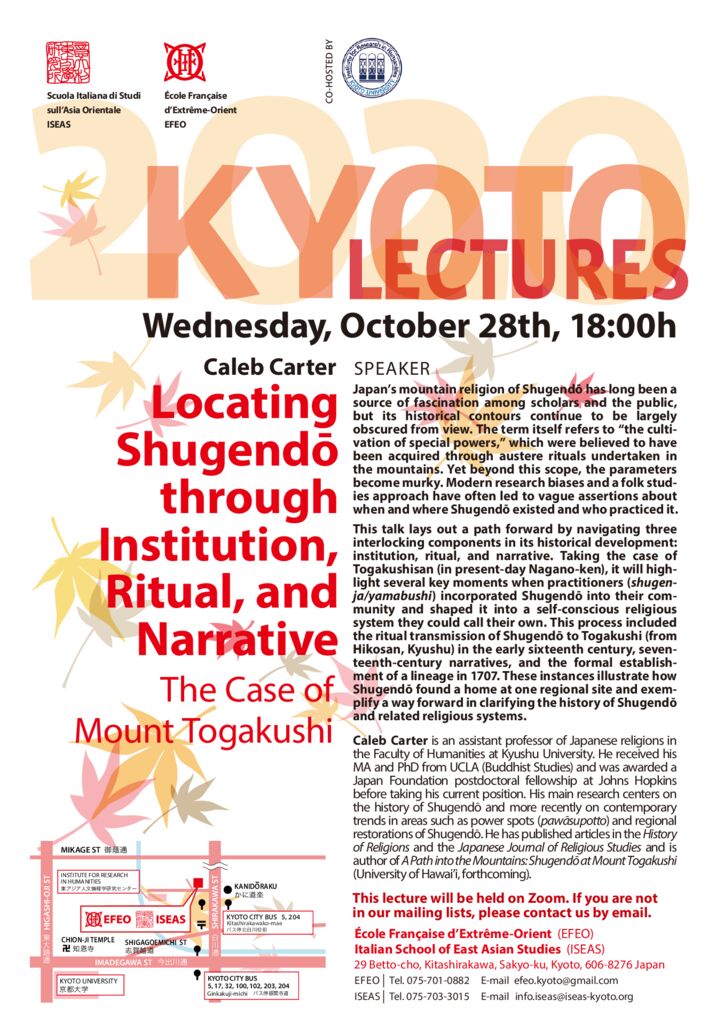 The Case of Mount Togakushi

Japan’s mountain religion of Shugendō has long been a source of fascination among scholars and the public, but its historical contours continue to be largely obscured from view. The term itself refers to “the cultivation of special powers,” which were believed to have been acquired through austere rituals undertaken in the mountains. Yet beyond this scope, the parameters become murky. Modern research biases and a folk studies approach have often led to vague assertions about when and where Shugendō existed and who practiced it.

This talk lays out a path forward by navigating three interlocking components in its historical development: institution, ritual, and narrative. Taking the case of Togakushisan (in present-day Nagano-ken), it will highlight several key moments when practitioners (shugenja/yamabushi) incorporated Shugendō into their community and shaped it into a self-conscious religious system they could call their own. This process included the ritual transmission of Shugendō to Togakushi (from Hikosan, Kyushu) in the early sixteenth century, seventeenth-century narratives, and the formal establishment of a lineage in 1707. These instances illustrate how Shugendō found a home at one regional site and exemplify a way forward in clarifying the history of Shugendō and related religious systems.

Caleb Carter is an assistant professor of Japanese religions in the Faculty of Humanities at Kyushu University. He received his MA and PhD from UCLA (Buddhist Studies) and was awarded a Japan Foundation postdoctoral fellowship at Johns Hopkins before taking his current position. His main research centers on the history of Shugendō and more recently on contemporary trends in areas such as power spots (pawāsupotto) and regional restorations of Shugendō. He has published articles in the History of Religions and the Japanese Journal of Religious Studies and is author of A Path into the Mountains: Shugendō at Mount Togakushi (University of Hawai’i, forthcoming).