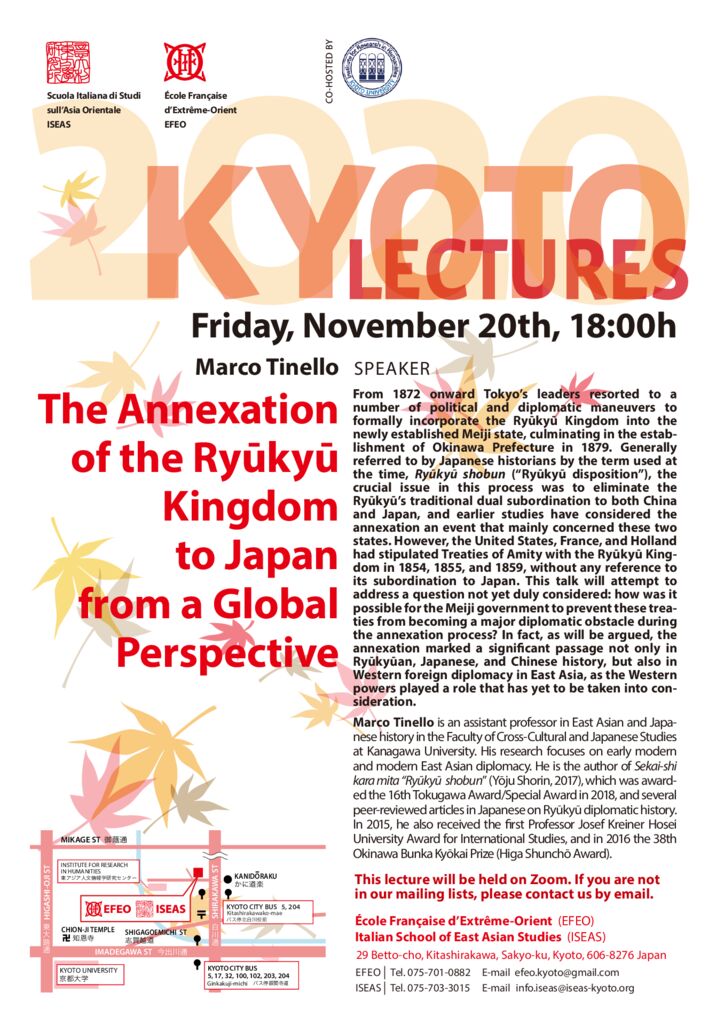 From 1872 onward Tokyo’s leaders resorted to a number of political and diplomatic maneuvers to formally incorporate the Ryūkyū Kingdom into the newly established Meiji state, culminating in the establishment of Okinawa Prefecture in 1879. Generally referred to by Japanese historians by the term used at the time, Ryūkyū shobun (“Ryūkyū disposition”), the crucial issue in this process was to eliminate the Ryūkyū’s traditional dual subordination to both China and Japan, and earlier studies have considered the annexation an event that mainly concerned these two states. However, the United States, France, and Holland had stipulated Treaties of Amity with the Ryūkyū Kingdom in 1854, 1855, and 1859, without any reference to its subordination to Japan. This talk will attempt to address a question not yet duly considered: how was it possible for the Meiji government to prevent these treaties from becoming a major diplomatic obstacle during the annexation process? In fact, as will be argued, the annexation marked a significant passage not only in Ryūkyūan, Japanese, and Chinese history, but also in Western foreign diplomacy in East Asia, as the Western powers played a role that has yet to be taken into consideration.

Marco Tinello is an assistant professor in East Asian and Japanese history in the Faculty of Cross-Cultural and Japanese Studies at Kanagawa University. His research focuses on early modern and modern East Asian diplomacy. He is the author of Sekai-shi kara mita “Ryūkyū  shobun” (Yōju Shorin, 2017), which was awarded the 16th Tokugawa Award/Special Award in 2018, and several peer-reviewed articles in Japanese on Ryūkyū diplomatic history. In 2015, he also received the first Professor Josef Kreiner Hosei University Award for International Studies, and in 2016 the 38th Okinawa Bunka Kyōkai Prize (Higa Shunchō Award).