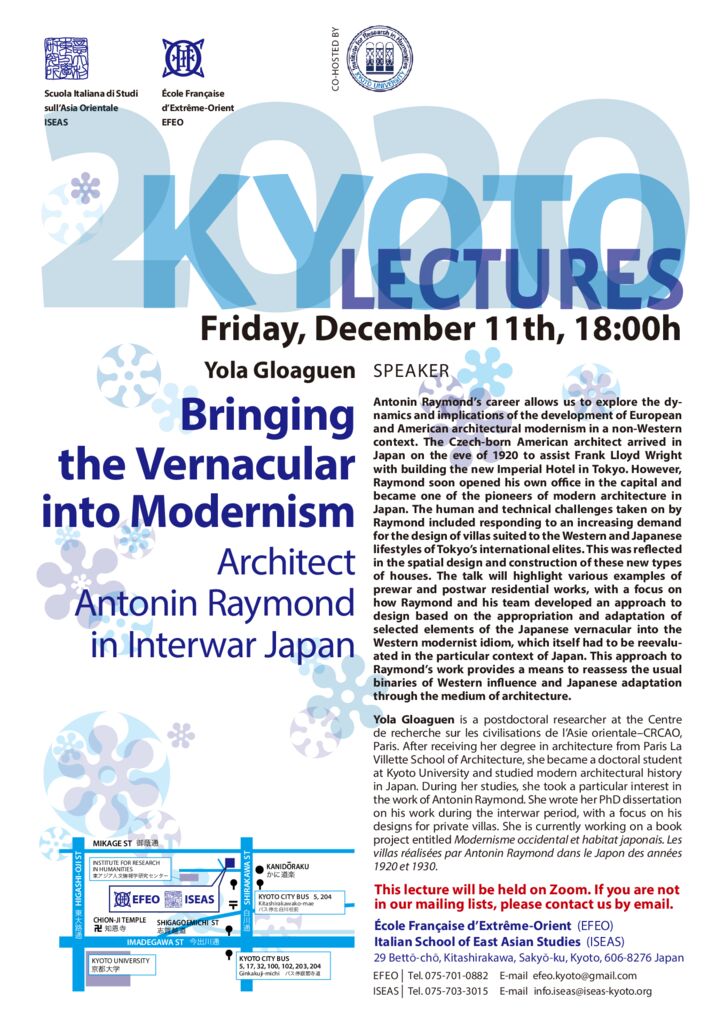 Bringing the Vernacular into Modernism

Antonin Raymond’s career allows us to explore the dynamics and implications of the development of European and American architectural modernism in a non-Western context. The Czech-born American architect arrived in Japan on the eve of 1920 to assist Frank Lloyd Wright with building the new Imperial Hotel in Tokyo. However, Raymond soon opened his own office in the capital and became one of the pioneers of modern architecture in Japan. The human and technical challenges taken on by  his office included responding to an increasing demand for the design of villas suited to the Western and Japanese lifestyles of Tokyo’s international elites. This was reflected in the spatial design and construction of these new types of houses. The talk will highlight various examples of prewar and postwar residential works, with a focus on how Raymond and his team developed an approach to design based on the appropriation and adaptation of selected elements of the Japanese vernacular into the Western modernist idiom, which itself had to be reevaluated in the particular context of Japan. This approach to Raymond’s work provides a means to reassess the usual binaries of Western influence and Japanese adaptation through the medium of architecture.

Yola Gloaguen is a postdoctoral researcher at the Centre de recherche sur les civilisations de l’Asie orientale–CRCAO, Paris. After receiving her degree in architecture from Paris La Villette School of Architecture, she became a doctoral student at Kyoto University and studied modern architectural history in Japan. During her studies, she took a particular interest in the work of Antonin Raymond. She wrote her PhD dissertation on his work during the interwar period, with a focus on his designs for private villas. She is currently working on a book project entitled Modernisme occidental et habitat japonais. Les villas réalisées par Antonin Raymond dans le Japon des années 1920 et 1930.