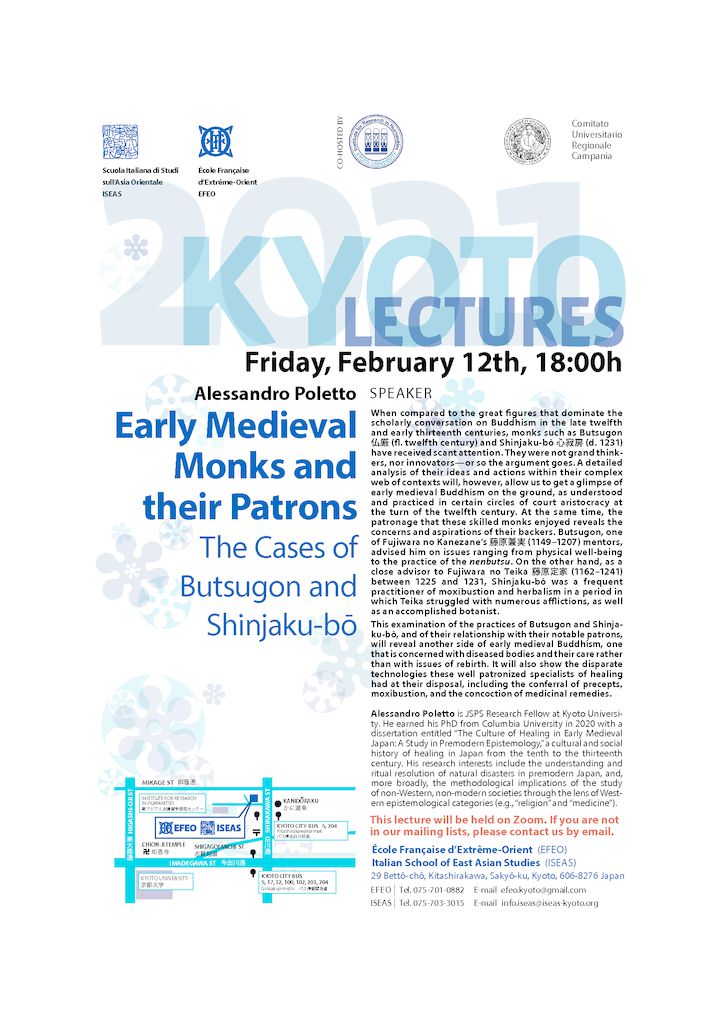 Early Medieval Monks and their Patrons

When compared to the great gures that dominate the scholarly conversation on Buddhism in the late twelfth and early thirteenth centuries, monks such as Butsugon 仏厳 (. twelfth century) and Shinjaku-bo 心寂房 (d. 1231) have received scant attention. They were not grand thinkers, nor innovators—or so the argument goes. A detailed analysis of their ideas and actions within their complex web of contexts will, however, allow us to get a glimpse of early medieval Buddhism on the ground, as understood and practiced in certain circles of court aristocracy at the turn of the twelfth century. At the same time, the patronage that these skilled monks enjoyed reveals the concerns and aspirations of their backers. Butsugon, one of Fujiwara no Kanezane’s 藤原兼実 (1149–1207) mentors, advised him on issues ranging from physical well-being to the practice of the nenbutsu. On the other hand, as a close advisor to Fujiwara no Teika 藤原定家 (1162–1241) between 1225 and 1231, Shinjaku-bo was a frequent practitioner of moxibustion and herbalism in a period in which Teika struggled with numerous aictions, as wellas an accomplished botanist.

This examination of the practices of Butsugon and Shinjaku-bo, and of their relationship with their notable patrons, will reveal another side of early medieval Buddhism, one that is concerned with diseased bodies and their care rather than with issues of rebirth. It will also show the disparate technologies these well patronized specialists of healing had at their disposal, including the conferral of precepts, moxibustion, and the concoction of medicinal remedies.

Alessandro Poletto is JSPS Research Fellow at Kyoto University. He earned his PhD from Columbia University in 2020 with a dissertation entitled “The Culture of Healing in Early Medieval Japan: A Study in Premodern Epistemology,” a cultural and social history of healing in Japan from the tenth to the thirteenth century. His research interests include the understanding and ritual resolution of natural disasters in premodern Japan, and, more broadly, the methodological implications of the study of non-Western, non-modern societies through the lens of Western epistemological categories (e.g., “religion” and “medicine”).