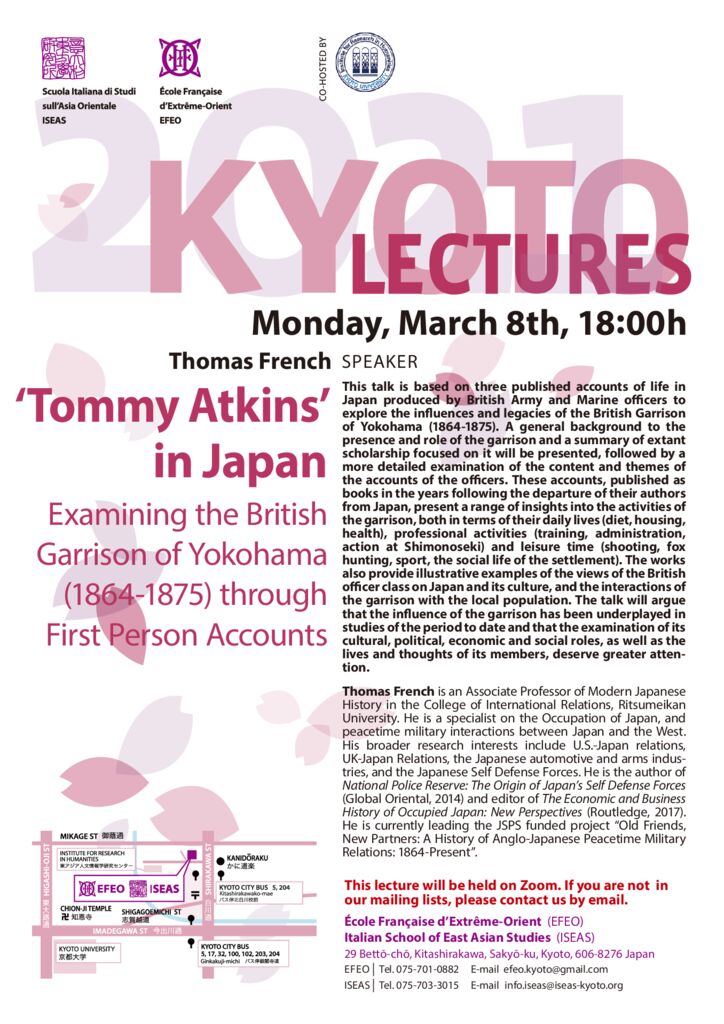 This talk is based on three published accounts of life in Japan produced by British Army and Marine officers to explore the influences and legacies of the British Garrison of Yokohama (1864-1875). A general background to the presence and role of the garrison and a summary of extant scholarship focused on it will be presented, followed by a more detailed examination of the content and themes of the accounts of the officers. These accounts, published as books in the years following the departure of their authors from Japan, present a range of insights into the activities of the garrison, both in terms of their daily lives (diet, housing, health), professional activities (training, administration, action at Shimonoseki) and leisure time (shooting, fox hunting, sport, the social life of the settlement). The works also provide illustrative examples of the views of the British officer class on Japan and its culture, and the interactions of the garrison with the local population. The talk will argue that the influence of the garrison has been underplayed in studies of the period to date and that the examination of its cultural, political, economic and social roles, as well as the lives and thoughts of its members, deserve greater attention.

Thomas French is an Associate Professor of Modern Japanese History in the College of International Relations, Ritsumeikan University. He is a specialist on the Occupation of Japan, and peacetime military interactions between Japan and the West. His broader research interests include U.S.-Japan relations, UK-Japan Relations, the Japanese automotive and arms industries, and the Japanese Self Defense Forces. He is the author of National Police Reserve: The Origin of Japan’s Self Defense Forces (Global Oriental, 2014) and editor of The Economic and Business History of Occupied Japan: New Perspectives (Routledge, 2017). He is currently leading the JSPS funded project “Old Friends, New Partners: A History of Anglo-Japanese Peacetime Military Relations: 1864-Present”.