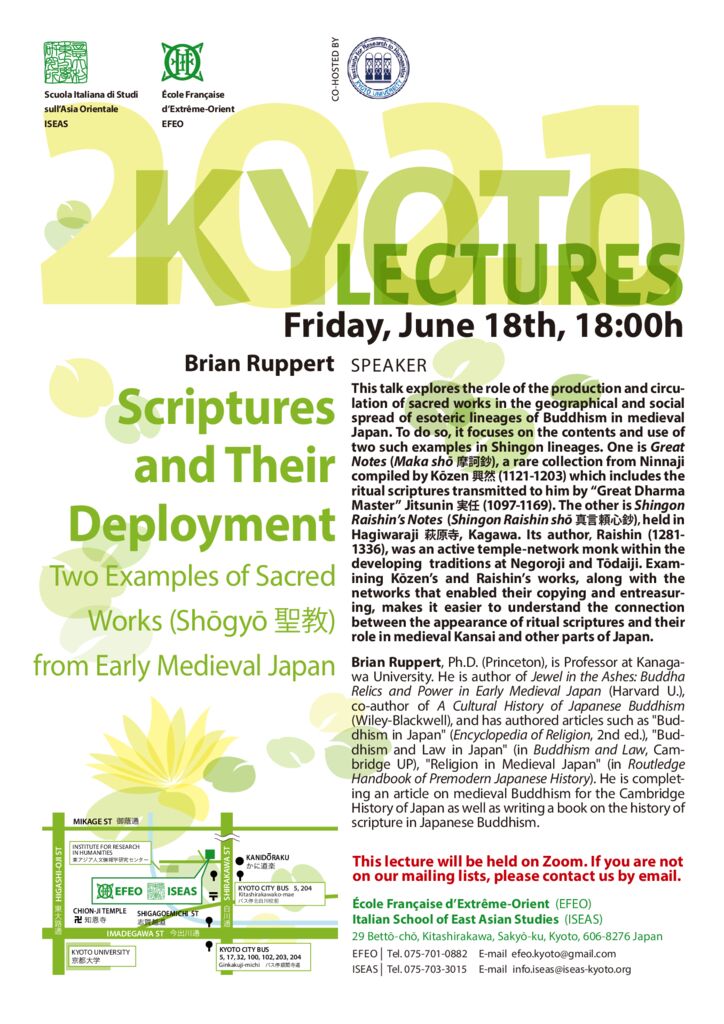 Scriptures and Their Deployment

This talk explores the role of the production and circulation of sacred works in the geographical and social spread of esoteric lineages of Buddhism in medieval Japan. To do so, it focuses on the contents and use of two such examples in Shingon lineages. One is Great Notes (Maka shō 摩訶鈔), a rare collection from Ninnaji compiled by Kōzen 興然 (1121-1203) which includes the ritual scriptures transmitted to him by “Great Dharma Master” Jitsunin 実任 (1097-1169). The other is Shingon Raishin’s Notes (Shingon Raishin shō 真言頼心鈔), held in Hagiwaraji 萩原寺, Kagawa. Its author, Raishin (1281-1336), was an active temple-network monk within the developing traditions at Negoroji and Tōdaiji. Examining Kōzen’s and Raishin’s works, along with the networks that enabled their copying and entreasuring, makes it easier to understand the connection between the appearance of ritual scriptures and their role in medieval Kansai and other parts of Japan.

Brian Ruppert, Ph.D. (Princeton), is Professor at Kanagawa University. He is author of Jewel in the Ashes: Buddha Relics and Power in Early Medieval Japan (Harvard U.), co-author of A Cultural History of Japanese Buddhism (Wiley-Blackwell), and has authored articles such as “Buddhism in Japan” (Encyclopedia of Religion, 2nd ed.), “Buddhism and Law in Japan” (in Buddhism and Law, Cambridge UP), “Religion in Medieval Japan” (in Routledge Handbook of Premodern Japanese History). He is completing an article on medieval Buddhism for the Cambridge History of Japan as well as writing a book on the history of scripture in Japanese Buddhism.