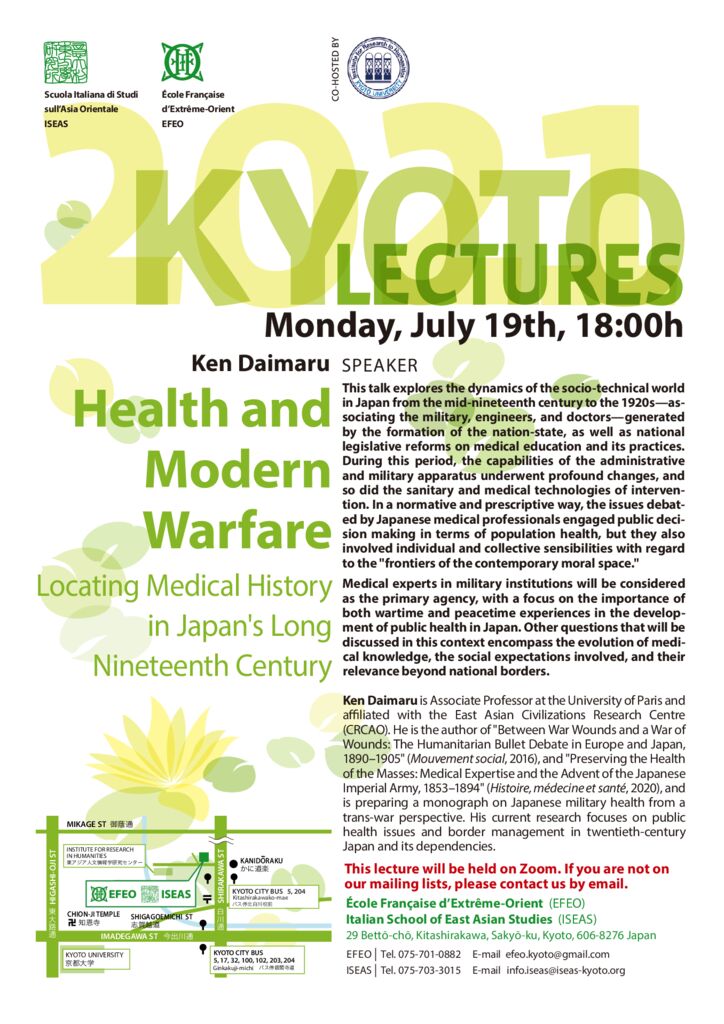 This talk explores the dynamics of the socio-technical world in Japan from the mid-nineteenth century to the 1920s—associating the military, engineers, and doctors—generated by the formation of the nation-state, as well as national legislative reforms on medical education and its practices. During this period, the capabilities of the administrative and military apparatus underwent profound changes, and so did the sanitary and medical technologies of intervention. In a normative and prescriptive way, the issues debated by Japanese medical professionals engaged public decision making in terms of population health, but they also involved individual and collective sensibilities with regard to the “frontiers of the contemporary moral space.”

Medical experts in military institutions will be considered as the primary agency, with a focus on the importance of both wartime and peacetime experiences in the development of public health in Japan. Other questions that will be discussed in this context encompass the evolution of medical knowledge, the social expectations involved, and their relevance beyond national borders.

Ken Daimaru is Associate Professor at the University of Paris and affiliated with the East Asian Civilizations Research Centre (CRCAO). He is the author of “Between War Wounds and a War of Wounds: The Humanitarian Bullet Debate in Europe and Japan, 1890–1905” (Mouvement social, 2016), and “Preserving the Health of the Masses: Medical Expertise and the Advent of the Japanese Imperial Army, 1853–1894” (Histoire, médecine et santé, 2020), and is preparing a monograph on Japanese military health from a trans-war perspective. His current research focuses on public health issues and border management in twentieth-century Japan and its dependencies.