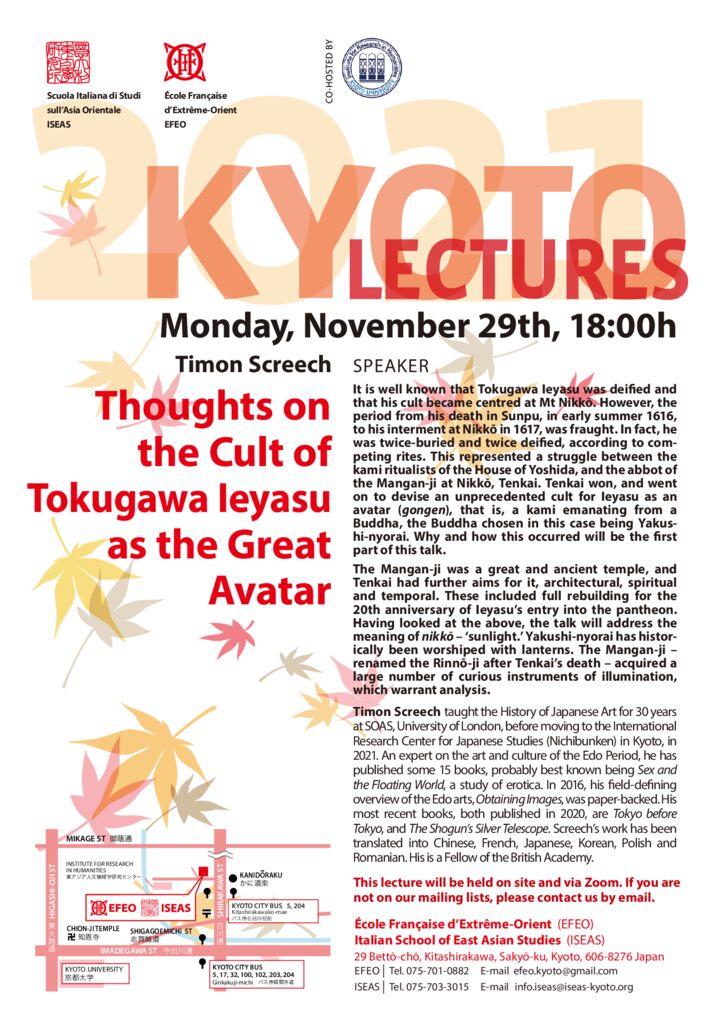 Thoughts on the Cult of Tokugawa Ieyasu as the Great Avatar

It is well known that Tokugawa Ieyasu was deified and that his cult became centred at Mt Nikkō. However, the period from his death in Sunpu, in early summer 1616, to his interment at Nikkō in 1617, was fraught. In fact, he was twice-buried and twice deified, according to competing rites. This represented a struggle between the kami ritualists of the House of Yoshida, and the abbot of the Mangan-ji at Nikkō, Tenkai. Tenkai won, and went on to devise an unprecedented cult for Ieyasu as an avatar (gongen), that is, a kami emanating from a Buddha, the Buddha chosen in this case being Yakushi-nyorai. Why and how this occurred will be the first part of this talk.

The Mangan-ji was a great and ancient temple, and Tenkai had further aims for it, architectural, spiritual and temporal. These included full rebuilding for the 20th anniversary of Ieyasu’s entry into the pantheon. Having looked at the above, the talk will address the meaning of nikkō – ‘sunlight.’ Yakushi-nyorai has historically been worshiped with lanterns. The Mangan-ji – renamed the Rinnō-ji after Tenkai’s death – acquired a large number of curious instruments of illumination, which warrant analysis.

Timon Screech taught the History of Japanese Art for 30 years at SOAS, University of London, before moving to the International Research Center for Japanese Studies (Nichibunken) in Kyoto, in 2021. An expert on the art and culture of the Edo Period, he has published some 15 books, probably best known being Sex and the Floating World, a study of erotica. In 2016, his field-defining overview of the Edo arts, Obtaining Images, was paper-backed. His most recent books, both published in 2020, are Tokyo before Tokyo, and The Shogun’s Silver Telescope. Screech’s work has been translated into Chinese, French, Japanese, Korean, Polish and Romanian. His is a Fellow of the British Academy.

This lecture will be available on Zoom. A limited audience (maximum twenty persons, with precedence to researchers and advanced students) will be allowed at our centre. For this, please contact us by e-mail. ()