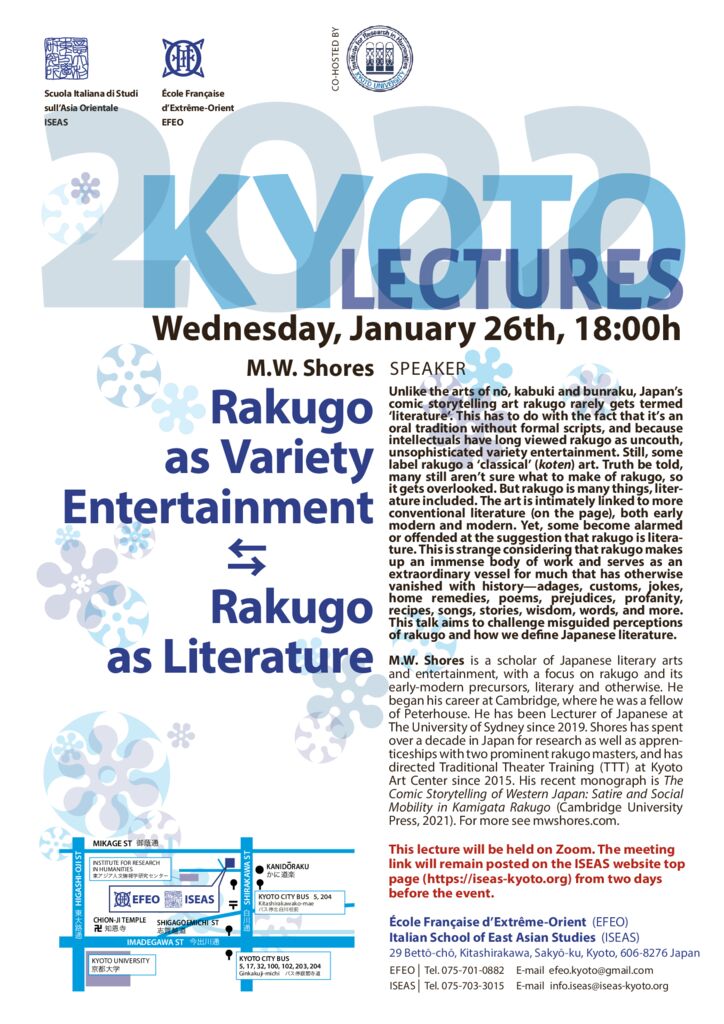 Unlike the arts of nō, kabuki and bunraku, Japan’s comic storytelling art rakugo rarely gets termed ‘literature’. This has to do with the fact that it’s an oral tradition without formal scripts, and because intellectuals have long viewed rakugo as uncouth, unsophisticated variety entertainment. Still, some label rakugo a ‘classical’ (koten) art. Truth be told, many still aren’t sure what to make of rakugo, so it gets overlooked. But rakugo is many things, literature included. The art is intimately linked to more conventional literature (on the page), both early modern and modern. Yet, some become alarmed or offended at the suggestion that rakugo is literature. This is strange considering that rakugo makes up an immense body of work and serves as an extraordinary vessel for much that has otherwise vanished with history—adages, customs, jokes, home remedies, poems, prejudices, profanity, recipes, songs, stories, wisdom, words, and more. This talk aims to challenge misguided perceptions of rakugo and how we define Japanese literature.

M.W. Shores is a scholar of Japanese literary arts and entertainment, with a focus on rakugo and its early-modern precursors, literary and otherwise. He began his career at Cambridge, where he was a fellow of Peterhouse. He has been Lecturer of Japanese at The University of Sydney since 2019. Shores has spent over a decade in Japan for research as well as apprenticeships with two prominent rakugo masters, and has directed Traditional Theater Training (TTT) at Kyoto Art Center since 2015. His recent monograph is The Comic Storytelling of Western Japan: Satire and Social Mobility in Kamigata Rakugo (Cambridge University Press, 2021). For more see mwshores.com.

The meeting link will remain posted on the ISEAS website top page from january 24.