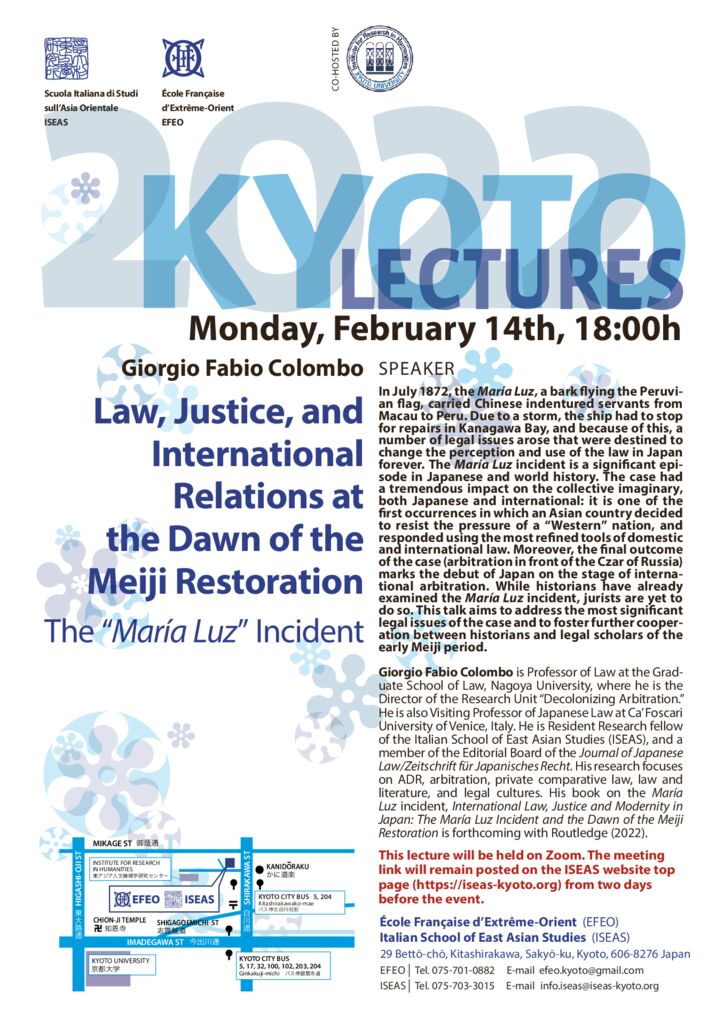 Law, Justice, and International Relations at the Dawn of the Meiji Restoration

In July 1872, the María Luz, a bark flying the Peruvian flag, carried Chinese indentured servants from Macau to Peru. Due to a storm, the ship had to stop for repairs in Kanagawa Bay, and because of this, a number of legal issues arose that were destined to change the perception and use of the law in Japan forever. The María Luz incident is a significant episode in Japanese and world history. The case had a tremendous impact on the collective imaginary, both Japanese and international: it is one of the first occurrences in which an Asian country decided to resist the pressure of a “Western” nation, and responded using the most refined tools of domestic and international law. Moreover, the final outcome of the case (arbitration in front of the Czar of Russia) marks the debut of Japan on the stage of international arbitration. While historians have already examined the María Luz incident, jurists are yet to do so. This talk aims to address the most significant legal issues of the case and to foster further cooperation between historians and legal scholars of the early Meiji period.

Giorgio Fabio COLOMBO is Professor of Law at the Graduate School of Law, Nagoya University, where he is the Director of the Research Unit “Decolonizing Arbitration.” He is also Visiting Professor of Japanese Law at Ca’ Foscari University of Venice, Italy. He is Resident Research fellow of the Italian School of East Asian Studies (ISEAS), and a member of the Editorial Board of the Journal of Japanese Law/Zeitschrift für Japanisches Recht. His research focuses on ADR, arbitration, private comparative law, law and literature, and legal cultures. His book on the María Luz incident, International Law, Justice and Modernity in Japan: The María Luz Incident and the Dawn of the Meiji Restoration is forthcoming with Routledge (2022).

The meeting link will remain posted on the ISEAS website top page from february 12.