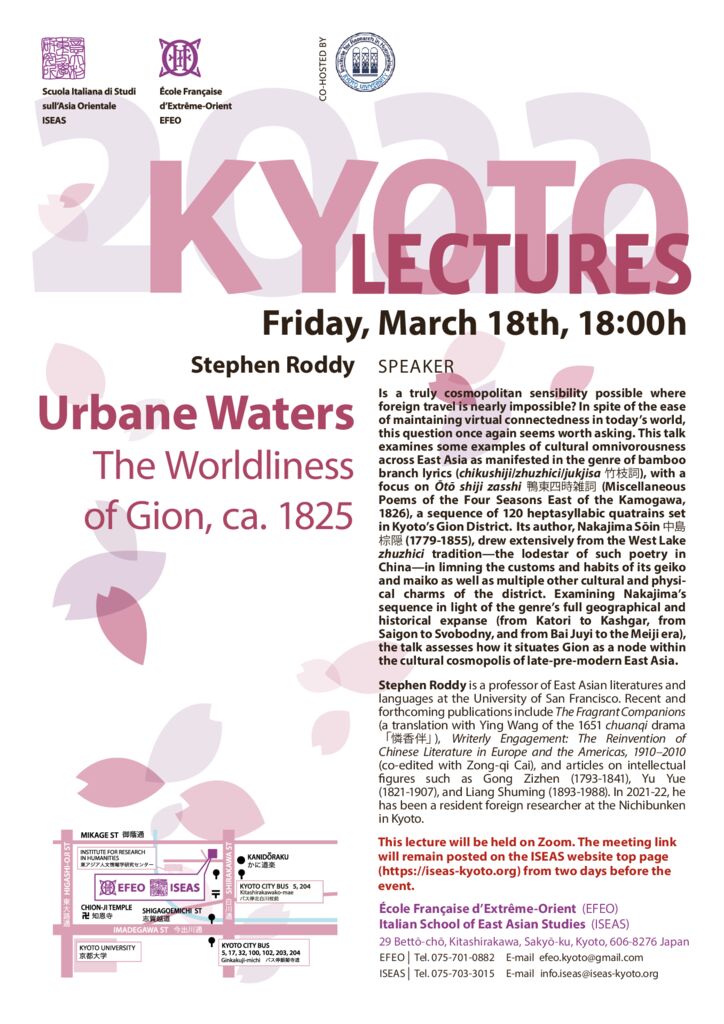 Is a truly cosmopolitan sensibility possible where foreign travel is nearly impossible? In spite of the ease of maintaining virtual connectedness in today’s world, this question once again seems worth asking. This talk examines some examples of cultural omnivorousness across East Asia as manifested in the genre of bamboo branch lyrics (chikushiji/zhuzhici/jukjisa 竹枝詞), with a focus on Ōtō shiji zasshi 鴨東四時雑詞 (Miscellaneous Poems of the Four Seasons East of the Kamogawa, 1826), a sequence of 120 heptasyllabic quatrains set in Kyoto’s Gion District. Its author, Nakajima Sōin 中島棕隠 (1779-1855), drew extensively from the West Lake zhuzhici tradition—the lodestar of such poetry in China—in limning the customs and habits of its geiko and maiko as well as multiple other cultural and physical charms of the district. Examining Nakajima’s sequence in light of the genre’s full geographical and historical expanse (from Katori to Kashgar, from Saigon to Svobodny, and from Bai Juyi to the Meiji era), the talk assesses how it situates Gion as a node within the cultural cosmopolis of late-pre-modern East Asia.

Stephen Roddy is a professor of East Asian literatures and languages at the University of San Francisco. Recent and forthcoming publications include The Fragrant Companions (a translation with Ying Wang of the 1651 chuanqi drama 「憐香伴」), Writerly Engagement: The Reinvention of Chinese Literature in Europe and the Americas, 1910–2010 (co-edited with Zong-qi Cai), and articles on intellectual figures such as Gong Zizhen (1793-1841), Yu Yue (1821-1907), and Liang Shuming (1893-1988). In 2021-22, he has been a resident foreign researcher at the Nichibunken in Kyoto.

The meeting link will remain posted on the ISEAS website top page from march 16.