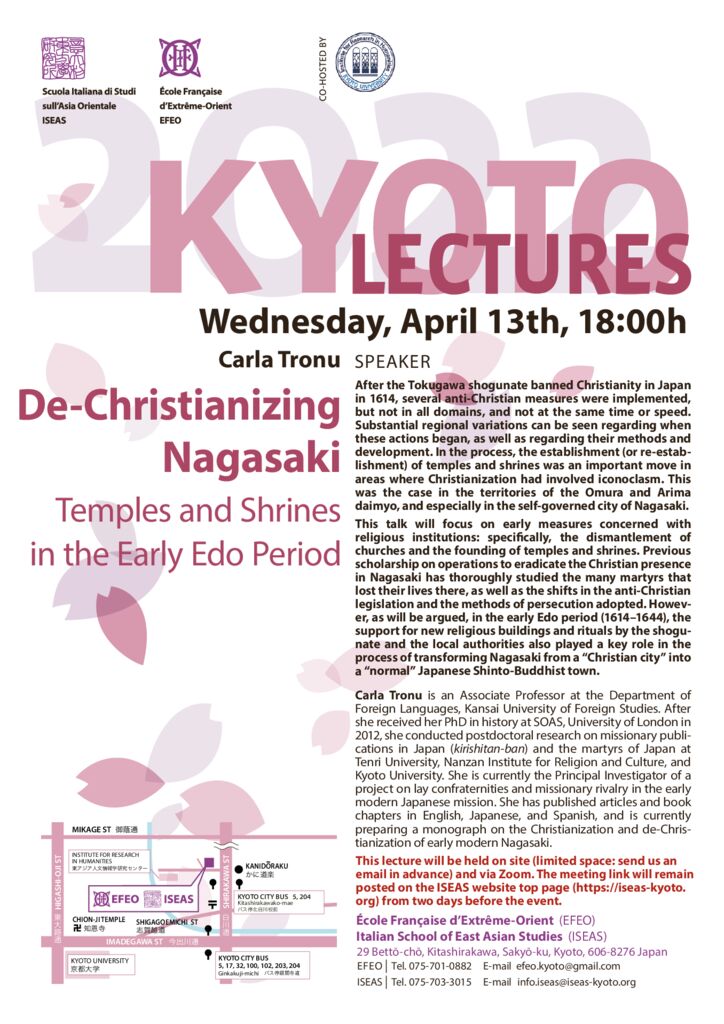 Temples and Shrines in the Early Edo period

After the Tokugawa shogunate banned Christianity in Japan in 1614, several anti-Christian measures were implemented, but not in all domains, and not at the same time or speed. Substantial regional variations can be seen regarding when these actions began, as well as regarding their methods and development. In the process, the establishment (or re-establishment) of temples and shrines was an important move in areas where Christianization had involved iconoclasm. This was the case in the territories of the Omura and Arima daimyo, and especially in the self-governed city of Nagasaki.

This talk will focus on early measures concerned with religious institutions: specifically, the dismantlement of churches and the founding of temples and shrines. Previous scholarship on operations to eradicate the Christian presence in Nagasaki has thoroughly studied the many martyrs that lost their lives there, as well as the shifts in the anti-Christian legislation and the methods of persecution adopted. However, as will be argued, in the early Edo period (1614–1644), the support for new religious buildings and rituals by the shogunate and the local authorities also played a key role in the process of transforming Nagasaki from a “Christian city” into a “normal” Japanese Shinto-Buddhist town.

Carla Tronu is an Associate Professor at the Department of Foreign Languages, Kansai University of Foreign Studies. After she received her PhD in history at SOAS, University of London in 2012, she conducted postdoctoral research on missionary publications in Japan (kirishitan-ban) and the martyrs of Japan at Tenri University, Nanzan Institute for Religion and Culture, and Kyoto University. She is currently the Principal Investigator of a project on lay confraternities and missionary rivalry in the early modern Japanese mission. She has published articles and book chapters in English, Japanese, and Spanish, and is currently preparing a monograph on the Christianization and de-Christianization of early modern Nagasaki.