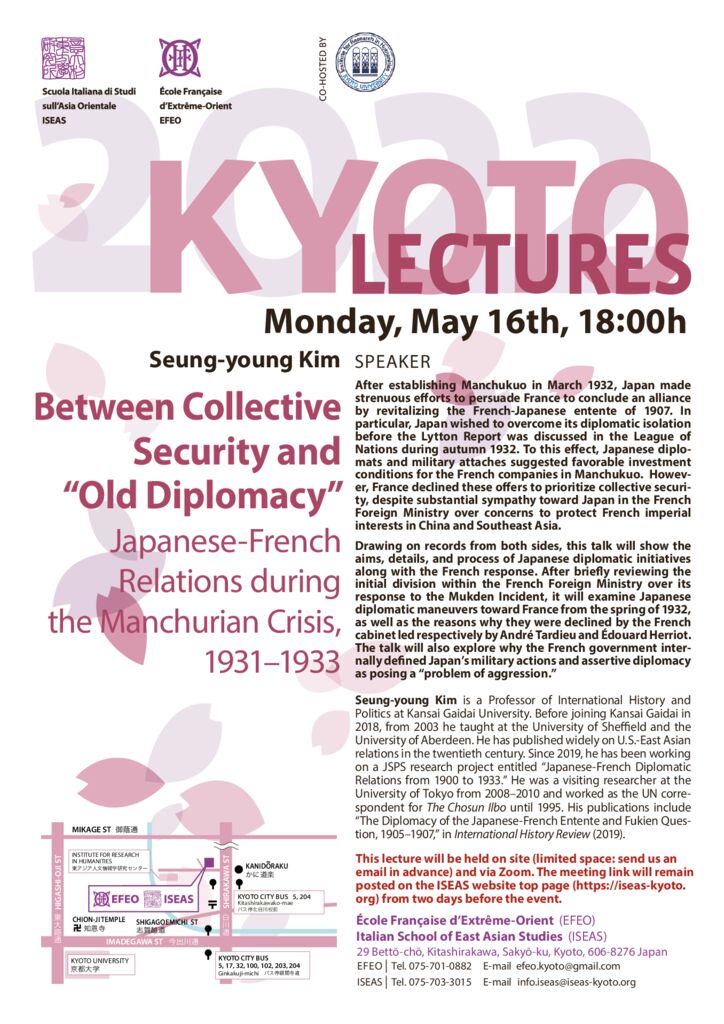 Between Collective Security and “Old Diplomacy”

Japanese-French Relations during the Manchurian Crisis, 1931–1933

After establishing Manchukuo in March 1932, Japan made strenuous efforts to persuade France to conclude an alliance by revitalizing the French-Japanese entente of 1907.  In particular, Japan wished to overcome its diplomatic isolation before the Lytton Report was discussed in the League of Nations during autumn 1932.  To this effect, Japanese diplomats and military attaches suggested favorable investment conditions for the French companies in Manchukuo. However, France declined these offers to prioritize collective security, despite substantial sympathy toward Japan in the French Foreign Ministry over concerns to protect French imperial interests in China and Southeast Asia.

Drawing on records from both sides, this talk will show the aims, details, and process of Japanese diplomatic initiatives along with the French response. After briefly reviewing the initial division within the French Foreign Ministry over its response to the Mukden Incident, it will examine Japanese diplomatic maneuvers toward France from the spring of 1932, as well as the reasons why they were declined by the French cabinet led respectively by André Tardieu and Édouard Herriot. The talk will also explore why the French government internally defined Japan’s military actions and assertive diplomacy as posing a “problem of aggression.”

Seung-young Kim is a Professor of International History and Politics at Kansai Gaidai University. Before joining Kansai Gaidai in 2018, from 2003 he taught at the University of Sheffield and the University of Aberdeen. He has published widely on U.S.-East Asian relations in the twentieth century.  Since 2019, he has been working on a JSPS research project entitled “Japanese-French Diplomatic Relations from 1900 to 1933.” He was a visiting researcher at the University of Tokyo from 2008–2010 and worked as the UN correspondent for The Chosun Ilbo until 1995. His publications include “The Diplomacy of the Japanese-French Entente and Fukien Question, 1905–1907,” in International History Review (2019).