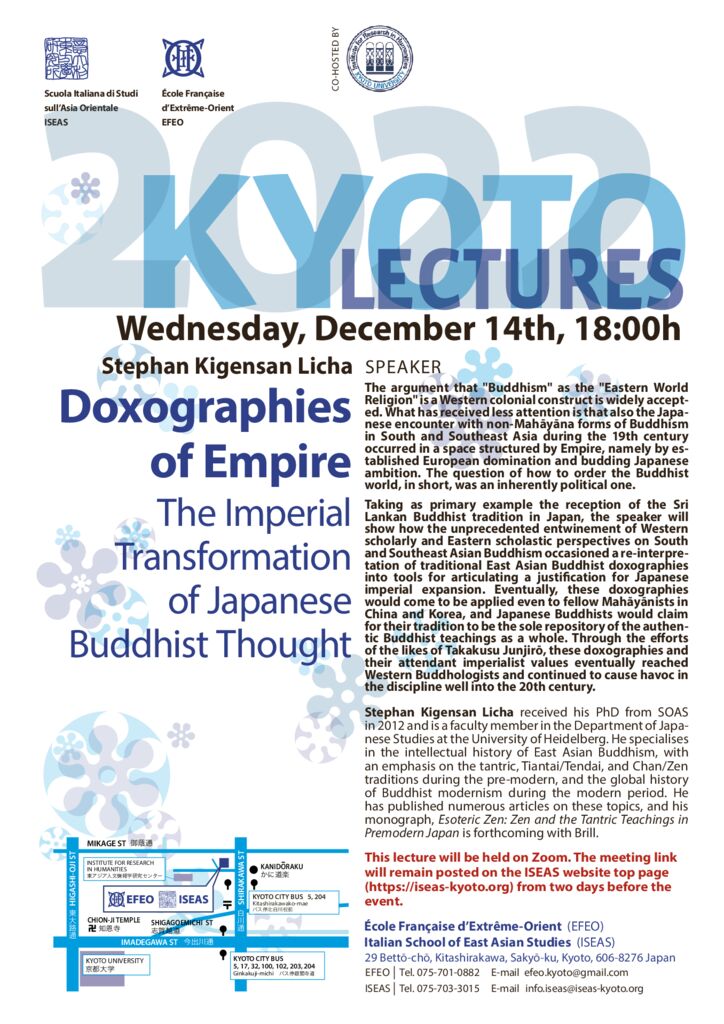 The argument that “Buddhism” as the “Eastern World Religion” is a Western colonial construct is widely accepted. What has received less attention is that also the Japanese encounter with non-Mahāyāna forms of Buddhism in South and Southeast Asia during the 19th century occurred in a space structured by Empire, namely by established European domination and budding Japanese ambition. The question of how to order the Buddhist world, in short, was an inherently political one.

Taking as primary example the reception of the Sri Lankan Buddhist tradition in Japan, the speaker will show how the unprecedented entwinement of Western scholarly and Eastern scholastic perspectives on South and Southeast Asian Buddhism occasioned a re-interpretation of traditional East Asian Buddhist doxographies into tools for articulating a justification for Japanese imperial expansion. Eventually, these doxographies would come to be applied even to fellow Mahāyānists in China and Korea, and Japanese Buddhists would claim for their tradition to be the sole repository of the authentic Buddhist teachings as a whole. Through the efforts of the likes of Takakusu Junjirō, these doxographies and their attendant imperialist values eventually reached Western Buddhologists and continued to cause havoc in the discipline well into the 20th century.

Stephan Kigensan Licha received his PhD from SOAS in 2012 and is a faculty member in the Department of Japanese Studies at the University of Heidelberg. He specialises in the intellectual history of East Asian Buddhism, with an emphasis on the tantric, Tiantai/Tendai, and Chan/Zen traditions during the pre-modern, and the global history of Buddhist modernism during the modern period. He has published numerous articles on these topics, and his monograph, Esoteric Zen: Zen and the Tantric Teachings in Premodern Japan is forthcoming with Brill.

The meeting link will remain posted on the ISEAS website top page from december 12.