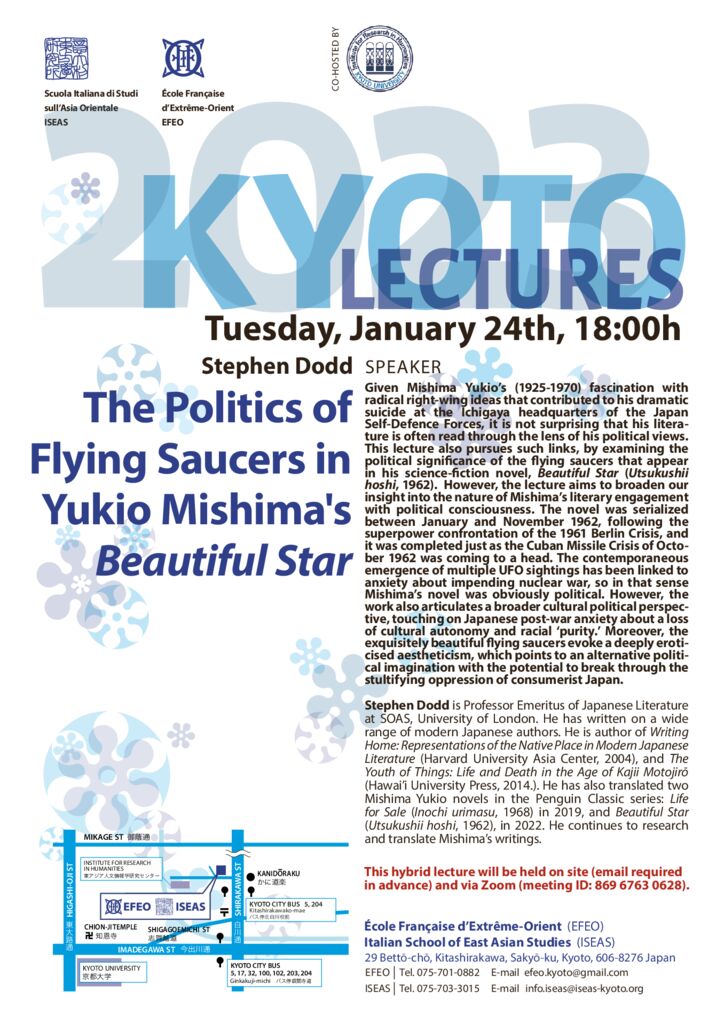 The Politics of Flying Saucers in Yukio Mishima’s Beautiful Star

Given Mishima Yukio’s (1925-1970) fascination with radical right-wing ideas that contributed to his dramatic suicide at the Ichigaya headquarters of the Japan Self-Defence Forces, it is not surprising that his literature is often read through the lens of his political views.  This lecture also pursues such links, by examining the political significance of the flying saucers that appear in his science-fiction novel, Beautiful Star (Utsukushii hoshi, 1962).  However, the lecture aims to broaden our insight into the nature of Mishima’s literary engagement with political consciousness.  The novel was serialized between January and November 1962, following the superpower confrontation of the 1961 Berlin Crisis, and it was completed just as the Cuban Missile Crisis of October 1962 was coming to a head.  The contemporaneous emergence of multiple UFO sightings has been linked to anxiety about impending nuclear war, so in that sense Mishima’s novel was obviously political.  However, the work also articulates a broader cultural political perspective, touching on Japanese post-war anxiety about a loss of cultural autonomy and racial ‘purity.’  Moreover, the exquisitely beautiful flying saucers evoke a deeply eroticised aestheticism, which points to an alternative political imagination with the potential to break through the stultifying oppression of consumerist Japan.

Stephen Dodd is Professor Emeritus of Japanese Literature at SOAS, University of London.  He has written on a wide range of modern Japanese authors.  He is author of Writing Home: Representations of the Native Place in Modern Japanese Literature (Harvard University Asia Center, 2004), and The Youth of Things: Life and Death in the Age of Kajii Motojirō (Hawai’i University Press, 2014.). He has also translated two Mishima Yukio novels in the Penguin Classic series: Life for Sale (Inochi urimasu, 1968) in 2019, and Beautiful Star (Utsukushii hoshi, 1962), in 2022.  He continues to research and translate Mishima’s writings.