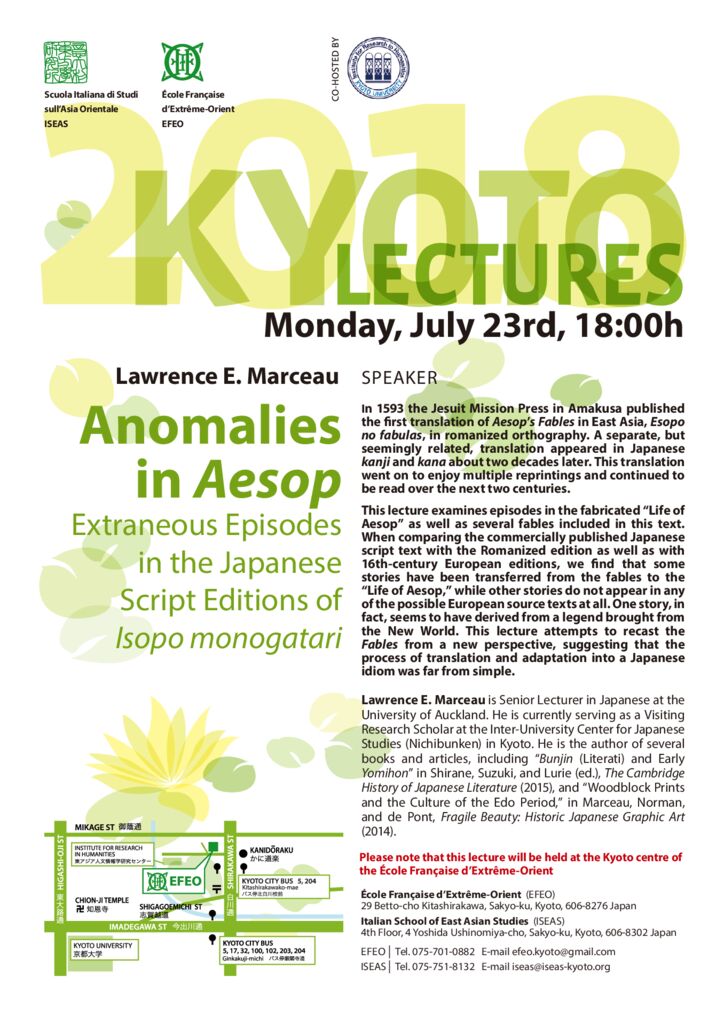 Extraneous Episodes in the Japanese Script Editions of Isopo monogatari

In 1593 the Jesuit Mission Press in Amakusa published the first translation of Aesop’s Fables in East Asia, Esopo no fabulas, in romanized orthography. A separate, but seemingly related, translation appeared in Japanese kanji and kana about two decades later. This translation went on to enjoy multiple reprintings and continued to be read over the next two centuries.

This lecture examines episodes in the fabricated “Life of Aesop” as well as several fables included in this text. When comparing the commercially published Japanese script text with the Romanized edition as well as with 16th-century European editions, we find that some stories have been transferred from the fables to the “Life of Aesop,” while other stories do not appear in any of the possible European source texts at all. One story, in fact, seems to have derived from a legend brought from the New World. This lecture attempts to recast the Fables from a new perspective, suggesting that the process of translation and adaptation into a Japanese idiom was far from simple.

Lawrence E. Marceau is Senior Lecturer in Japanese at the University of Auckland. He is currently serving as a Visiting Research Scholar at the Inter-University Center for Japanese Studies (Nichibunken) in Kyoto. He is the author of several books and articles, including recently “Bunjin (Literati) and Early Yomihon” in Shirane, Suzuki, and Lurie (ed.), The Cambridge History of Japanese Literature (2015), and “Woodblock Prints and the Culture of the Edo Period,” in Marceau, Norman, and de Pont, Fragile Beauty: Historic Japanese Graphic Art (2014).