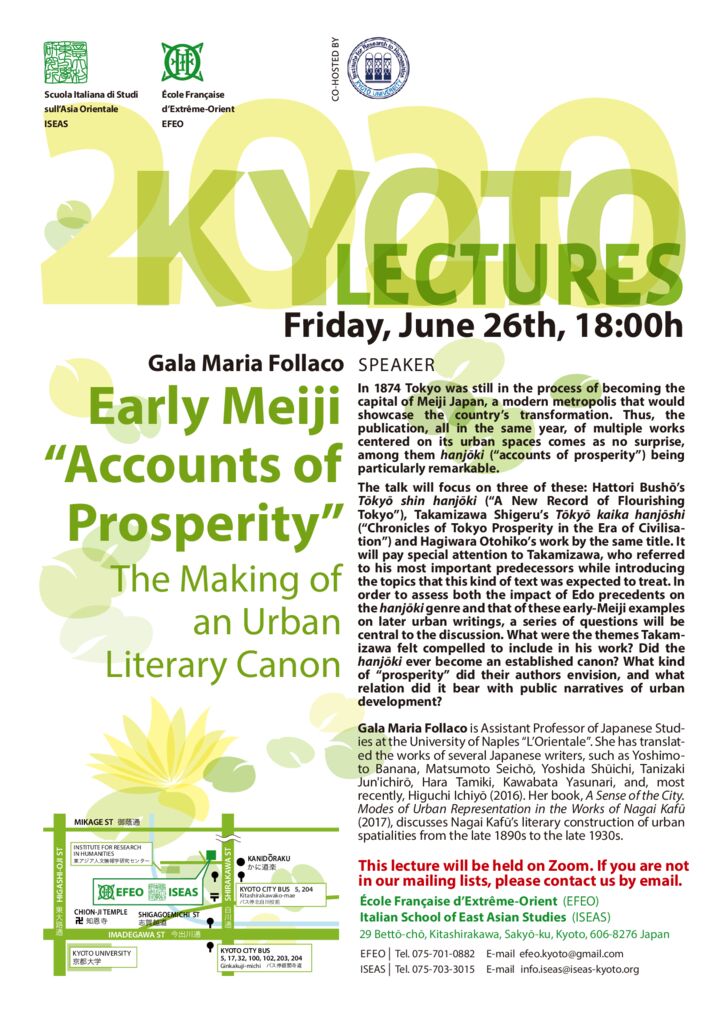 The Making of an Urban Literary Canon

In 1874 Tokyo was still in the process of becoming the capital of Meiji Japan, a modern metropolis that would showcase the country’s transformation. Thus, the publication, all in the same year, of multiple works centered on its urban spaces comes as no surprise, among them hanjôki (“accounts of prosperity”) being particularly remarkable.

The talk will focus on three of these: Hattori Busho’s Tôkyô shin hanjôki (“A New Record of Flourishing Tokyo”), Takamizawa Shigeru’s Tôkyô kaika hanjôshi (“Chronicles of Tokyo Prosperity in the Era of Civilisation”) and Hagiwara Otohiko’s work by the same title. It will pay special attention to Takamizawa, who referred to his most important predecessors while introducing the topics that this kind of text was expected to treat. In order to assess both the impact of Edo precedents on the hanjôki genre and that of these early-Meiji examples on later urban writings, a series of questions will be central to the discussion. What were the themes Takamizawa felt compelled to include in his work? Did the hanjôki ever become an established canon? What kind of “prosperity” did their authors envision, and what relation did it bear with public narratives of urban development?

Gala Maria Follaco is Assistant Professor of Japanese Studies at the University of Naples “L’Orientale”. She has translated the works of several Japanese writers, such as Yoshimoto Banana, Matsumoto Seicho, Yoshida Shuichi, Tanizaki Jun’ichiro, Hara Tamiki, Kawabata Yasunari, and, most recently, Higuchi Ichiyo (2016). Her book, A Sense of the City. Modes of Urban Representation in the Works of Nagai Kafu (2017), discusses Nagai Kafu’s literary construction of urban spatialities from the late 1890s to the late 1930s.