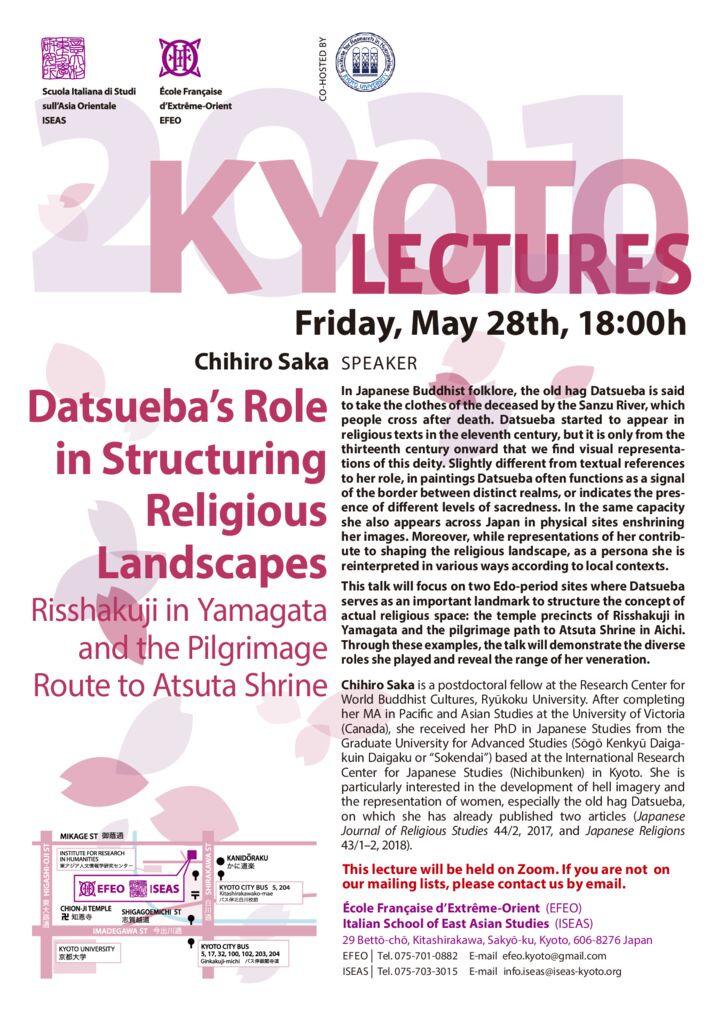 Risshakuji in Yamagata and the Pilgrimage Route to Atsuta Shrine

In Japanese Buddhist folklore, the old hag Datsueba is said to take the clothes of the deceased by the Sanzu River, which people cross after death. Datsueba started to appear in religious texts in the eleventh century, but it is only from the thirteenth century onward that we find visual representations of this deity. Slightly different from textual references to her role, in paintings Datsueba often functions as a signal of the border between distinct realms, or indicates the presence of different levels of sacredness. In the same capacity she also appears across Japan in physical sites enshrining her images. Moreover, while representations of her contribute to shaping the religious landscape, as a persona she is reinterpreted in various ways according to local contexts.

This talk will focus on two Edo-period sites where Datsueba serves as an important landmark to structure the concept of actual religious space: the temple precincts of Risshakuji in Yamagata and the pilgrimage path to Atsuta Shrine in Aichi. Through these examples, the talk will demonstrate the diverse roles she played and reveal the range of her veneration.

Chihiro Saka is a postdoctoral fellow at the Research Center for World Buddhist Cultures, Ryukoku University. After completing her MA in Pacific and Asian Studies at the University of Victoria (Canada), she received her PhD in Japanese Studies from the Graduate University for Advanced Studies (Sogo Kenkyu Daigakuin Daigaku or “Sokendai”) based at the International Research Center for Japanese Studies (Nichibunken) in Kyoto. She is particularly interested in the development of hell imagery and the representation of women, especially the old hag Datsueba, on which she has already published two articles (Japanese Journal of Religious Studies 44/2, 2017, and Japanese Religions 43/1–2, 2018).